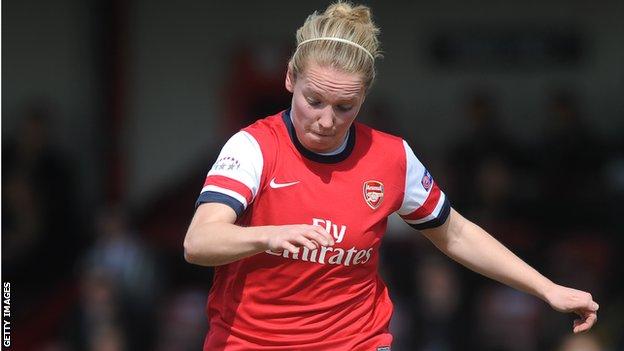 The 22-year-old has been a regular for her club since arriving from Hibernian six years ago.

The Scot was part of the British Olympic team that reached the quarter-finals of the London 2012 Olympics.

"For years I have watched this event on television so to come here and win the first award is fantastic," said Little.

"It was a great night for me."

Women have been allowed the join the PFA - the players' union - for the first time from next season. The award was presented at a ceremony in London.

Little said: "To win the award with so many great footballers in the room was a great occasion.

"I knew that I was going to be asked some questions on the stage so I was getting ready for them.

"A lot of the English girls have been members of the PFA for the past year or so.

"Now the PFA membership has been opened up to the whole women's league in England, so it's great step for women's football.

"This is my sixth season (at Arsenal) and, as I play attacking midfield, I like to get forward and score goals."