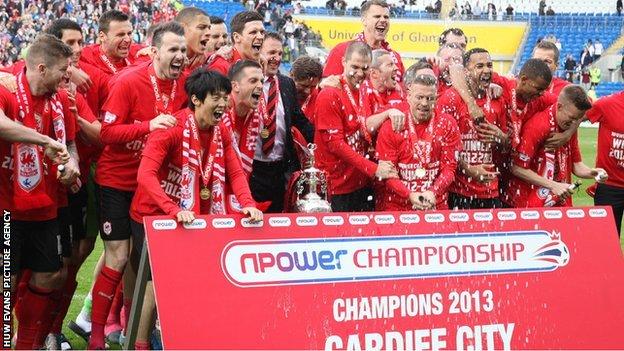 The 33-year-old striker has won 73 caps for Wales, scoring 19 goals, and has enjoyed a stellar career with clubs including Liverpool and Newcastle.

But Bellamy says lifting his home-town club to the top flight crowns it all.

"We set out to get promoted, but the icing on the cake was to lift the trophy," said Bellamy.

"In football terms this is the best for so many reasons, not just football, it's meant a lot.

"That puts us on 86 points, I think that equals the best tally in Cardiff's history - we've just managed to break records constantly this year.

We deserved to go up and it's just a credit to be with such a group of boys... I'm truly honoured to be a part of them

"The home games, the amount we've won, it's been something that this club has been building towards, but to actually achieve it still leaves us all in a little bit of shock.

"Leading the table since November, we've deserved to be champions and it's taken a lot of hard work."

The Championship trophy was presented to Cardiff after their at a packed Cardiff City Stadium on Saturday.

Play-off chasing Bolton had taken the lead through Chris Eagles but Cardiff battled back to equalise through Craig Noone's free-kick, showing the grit that has seen the Bluebirds lose just twice at home in the league this season.

Bellamy added: "It's been a tough couple of weeks because emotionally you're drained, but it's been a hard-fought season, as it always is in the Championship."

He said he was "truly honoured" to be with "such a group of boys who are willing to work so hard, day in day out."

"It's just a great achievement for everyone," he added. "But in the back of your mind you can't help but think 'it's going to be Premier League football', the teams that are going to be here next year [are going to be at] another level.

"I'm just looking forward to a nice break now, my body needs it, it really does, and then come back fresh with a new insight into the big challenge the season is going to be next year.

"You can take for granted that it's going to be a tough, tough season."