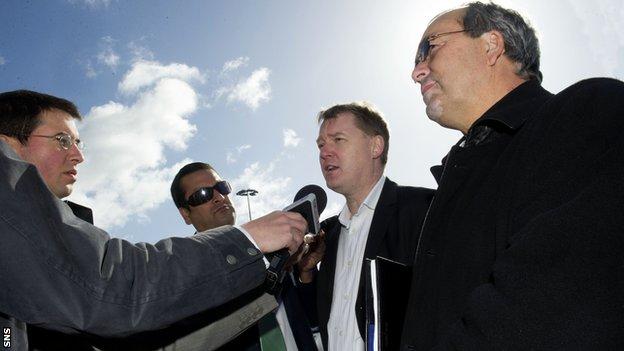 The prospects of imminent change to the structure of Scottish football appear remote, following a meeting of the 12 Scottish Premier League clubs.

The clubs believe a league merger cannot be achieved before next season, with an "all-through financial distribution model" also shelved.

The only possibility for short-term change is the introduction of play-offs next season.

A meeting has been called for next week to explore this possibility further.

"There was a view from some clubs that they wanted the opportunity to come back again and test whether anything positive can be delivered.

"The clubs have reluctantly agreed that it is not realistic to achieve a full merger in time for this summer.

"But there is a will to continue to explore whether anything can be done, particularly including play-offs, understanding the difficulties that are involved when you are cherry-picking in that way.

"Any play-offs would need agreement with the Scottish Football League."

Four different play-off models were discussed at Hampden and more detail will be supplied at next week's gathering, although no formal vote will be taken then.

Doncaster insisted that play-offs could be agreed fairly late in the day, compared to proposals such as having one league body run Scottish football.

He warned about taking elements of the original proposals in isolation, that "it may suit some clubs far more than it would suit others", and underlined the difficulty of asking clubs to take on an additional risk of relegation, without an improved financial deal for clubs going down.

On the plus side, he said, play-offs provide a better route back to the SPL for clubs who do get relegated and the games themselves generate additional revenue.

"What you are asking clubs to do is to take on the additional risk of being relegated but without all of the financial benefits that would have accompanied that risk with the all-through distribution model and the merger," he said.

"The package that was on the table would have seen a huge redistribution away from the SPL to create a more benign financial environment in the First Division.

"The clubs looked at a number of different proposals today. What you need to do is cost out what revenues are likely to be generated by a particular model and how you distribute those revenues.

"You need to work out how you reward clubs for the extra risk that they would be taking on if they are agreed.

"You are still leaving the First Division with the same financial arrangements they have at the moment and, if you do that, then it is even more unattractive to be relegated to that place."

Asked whether any commercial contracts, such as with broadcasters and sponsors, would be more lucrative if play-offs were brought in, Doncaster replied: "None of our deals require play-offs but we have seen the massively re-invigorating effect that play-offs have had in other leagues in Europe.

"To create more drama is inherently a good thing and that will help in terms of people coming through the turnstiles and commercial deals, but clubs have to be prepared to accept the additional risks."

And on whether fans would buy into the status quo next season, he said: "Football is a huge part of Scottish society and I'm sure will remain so whatever the league structure.

"But the economy is in a difficult place so there will continue to be challenges whatever league structure you have."