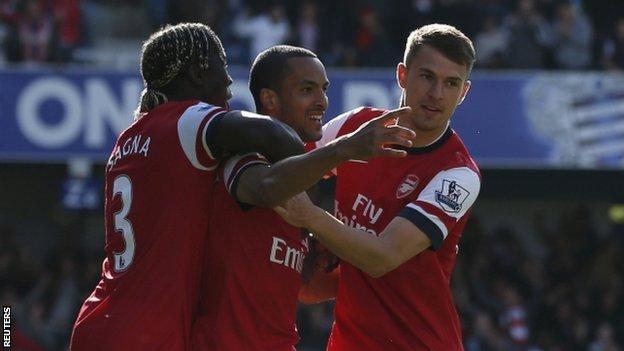 Theo Walcott scored the fastest Premier League goal of the season to sink QPR and send Arsenal into third place.

Walcott struck after 20 seconds, latching on to Mikel Arteta's deft pass and firing past Rob Green.

Arsenal dominated the early stages and went close to doubling their lead when Green clawed a low Walcott snap-shot on to his post.

Quick off the mark

Theo Walcott's strike after 20 seconds is Arsenal's fastest in the Premier League era and beats Robin van Persie's deflected goal after 32 seconds for Manchester United against West Ham as the fastest Premier League goal of the season. Van Persie scored what proved to be the winner against the Hammers at Old Trafford on 28 November.

Ledley King holds the record for the fastest goal in Premier League history (since 1992). He netted after 10 seconds in Tottenham's 3-3 draw at Bradford City on 9 December 2000.

QPR improved after the break but the closest they came to a reply was when Wojciech Szczesny denied Loic Remy.

Walcott's goal provided Arsene Wenger's side with an ideal start and was also the perfect riposte to Tottenham's win over Southampton earlier on Saturday. That had seen the Gunners temporarily drop to fifth place, a point behind Spurs and Chelsea who both have games in hand.

Whether Arsenal, who have been ever-presents in the Champions League for the past 15 seasons, finish in the top four this time remains to be seen but this victory, their sixth in their last eight games, at least gives them hope going into their last two games of the season.

It was by no means as straightforward a win as seemed likely when Walcott put them ahead, however.

Arsenal encountered little resistance as they advanced straight from kick-off and, following Armand Traore's poor header, Arteta got on the end of Tomas Rosicky's cross and slipped in Walcott to find a clinical finish.

Bottom side QPR initially offered little response and the Gunners continued to look dangerous whenever they ventured forward.

Walcott, who has now hit the 20-goal mark for the first time in a single season, went close to making it 2-0 before the half-hour mark when Green turned his low shot on to the post.

But the home side, whose relegation was confirmed last weekend, belatedly began to offer some resistance.

Andros Townsend was their biggest threat, repeatedly running at the Gunners defence and setting up shooting chances for Ji Sung Park and Bobby Zamora, both of which were wasted.

Arsenal remained on the back foot at the start of the second half. Townsend, on loan at Rangers from Arsenal's rivals Spurs, remained dangerous and his swerving shot forced a good save from Szczesny.

The Gunners found themselves in a scrap but responded with a spell where they dominated possession. They could not get behind QPR's defence, however, and it was the hosts who created the best late chances.

Remy also tested Szczesny after cutting in from the left and he repeated the trick with 10 minutes to go, this time with a curling shot that forced the Arsenal keeper into his best stop of the evening.

"When you go 1-0 down to Arsenal in the first minute then you fear the worse, but I felt we played every bit as well as them.

"I felt we were always a threat and Andros Towsend was outstanding. I don't know where we'll get another Townsend from, he'll go back to Tottenham a better play.

"I'm looking forward to the challenge next season. I went to watch a (Championship) game today because we're going to be in that division next season."

"We had a great start and surprised QPR. But then they came back strongly and showed they have no fear.

"I think they've got a good chance of coming back up to the Premier League. We're on a very strong run and want that to carry on until the end of the season.

"You can only win your own games and see what happens elsewhere. Football is unpredictable but for three months we've been in a position where we cannot afford to drop points."