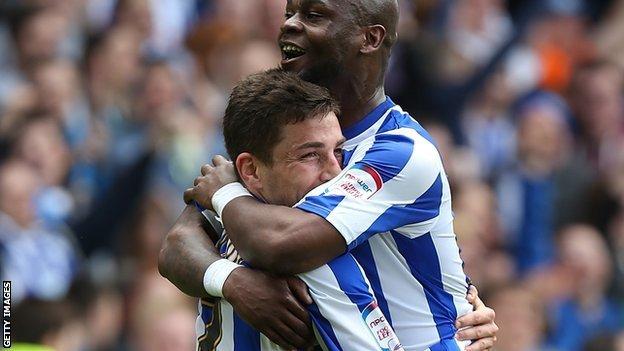 First-half goals from Steve Howard and Leroy Lita gave Sheffield Wednesday a win against Middlesbrough as the Owls made sure of Championship survival.

The hosts could have been relegated if they had not won and other results went against them on a dramatic final day.

But Howard gave Wednesday an early lead, firing a shot which went in off the underside of the crossbar.

Middlesbrough, without an away win in 2013, conceded a second when Leroy Lita headed in from Lewis Buxton's corner.

Wednesday end their season 18th in the table - four points above the drop zone - with this victory, their first in five games, coming in front of a crowd of 31,375 at Hillsborough.

They went ahead in the ninth minute when Howard scored his first goal for the club since joining on loan from Hartlepool.

The big striker ran on to an incisive low ball from Seyi Olofinjana and powered an effort past Middlesbrough goalkeeper Jason Steele.

Curtis Main was Boro's only threat and he dragged an attempt across goal after he had twisted to create space for the opening.

However, Wednesday doubled their lead just after the half-hour mark as Buxton's inswinging corner was glanced home by Lita in a packed six-yard box.

Boro offered more after the break and Christian Burgess headed narrowly over from Grant Leadbitter's corner, although the result never looked in doubt.

Wednesday fans ran on to the pitch at the end of the match as they celebrated maintaining their Championship status, while Peterborough filled the final relegation place after losing 3-2 at Crystal Palace.

Middlesbrough had been in the play-off places at the start of 2013, but only won three of their last 21 league matches to end the season 16th, one point and two places above their opponents.

"This is a far bigger achievement than last year. Nobody will ever sway me on that because this has been a tough year for this football club.

"Everything was in jeopardy as if the club gets relegated it affects everybody, not just the players - the supporters, the whole staff.

"So I made sure the players knew about that today. Their responsibility is to keep this club in this division."

"We could have gone top on New Year's Day if we'd beaten Derby.

"So for 27 games we were as good as anybody in this league, for the rest we have struggled. We've won three of them so it should be no surprise to us we didn't get a victory today, we have to get stronger I think.

"Ultimately the squad has to be stronger and deeper to try and sustain it.

"And hopefully you keep your best 11, 12 or 13 players fit for most of the season but we've fallen away, we can't hide that fact, it is what it is."