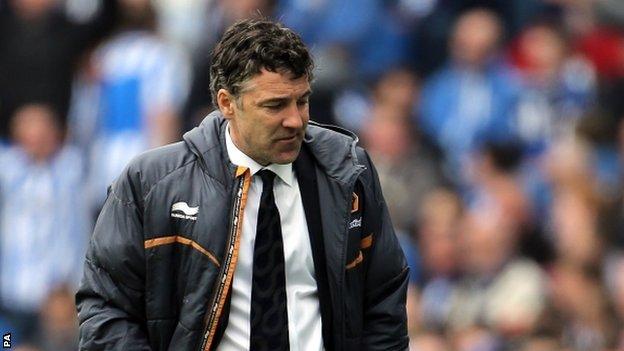 Wolves needed to win and hope other results went their way to stay up but their slim hopes evaporated when LuaLua cut inside to score after five minutes.

Another fine solo goal by LuaLua before the break sealed Wolves' fate.

Wolves return to the third tier for the first time since 1989 and become the first team to twice suffer back-to-back relegations from the top flight.

To stand any chance of survival, Dean Saunders's side had needed to win and see Peterborough and Barnsley lose, while also requiring a five-goal swing on goal difference.

In the end, Posh lost and the Tykes drew, but Wolves' defeat meant all of that was meaningless.

At first, the visitors looked up for the fight and were first to threaten when Bakary Sako fired against the post after three minutes.

But LuaLua's low finish from the edge of the box moments later was a blow from which Wolves would not recover.

Wolves, who finished bottom of the Premier League last season, toiled in search of a reply but the closest they came to a consolation goal was when Kevin Doyle stung the palms of Kuszczak.

Sako, Matt Doherty and George Elokobi, making his first appearance since suffering a fractured ankle in September, all succumbed to injuries as Wolves' disastrous campaign finished in frustrating style.

And Brighton, who face arch-rivals Crystal Palace in their play-off semi-final next week, almost added to their misery before the end when Ashley Barnes, Jose Ulloa and Rodriguez Vicente all went close.

"It is not a normal game [against Palace]. How can you make this into a normal game of football? I will be trying my best to think only about football.

"What it comes down to is two games. We`ll have a great go.

"We are certainly one of the teams in the best form having gone nine games unbeaten."