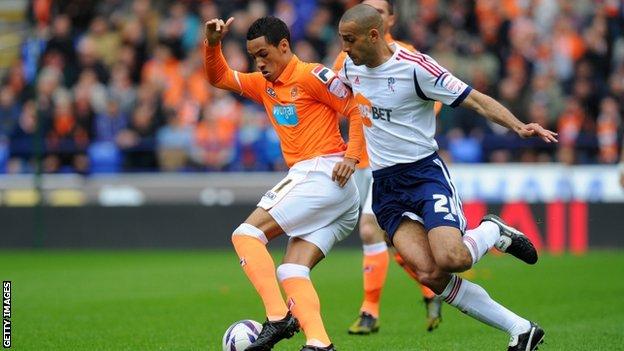 Bolton fought back from two goals down to earn a draw against Blackpool but missed out on the Championship play-offs on goal difference.

Matt Phillips gave Blackpool the lead and Ludovic Sylvestre volleyed in a second for the hosts after 35 minutes.

The Trotters dominated the second half but Leicester's win at Nottingham Forest meant they dropped to seventh.

With eight wins from their last eight home games, Bolton fans arrived at the Reebok Stadium in good spirits, evidently confident that they would be in the play-off picture come Saturday evening.

Prior to Leicester's last-day win at Nottingham Forest, the Foxes had won only one of their previous 12 league games - a 3-2 home triumph against Bolton

But with news of an early goal for Nottingham Forest against Leicester meaning Forest would move above Bolton as things stood, a lively atmosphere gave way to nervousness in the early stages at the Reebok.

Tensions were eased as Bolton started to take control of the game and a Rob Hall free-kick was prodded just wide of his own goal by Blackpool defender Stephen Crainey, before Davies volleyed over.

But in the 21st minute the visitors took the lead when Gary Taylor-Fletcher fed a pass to Phillips inside the area and the forward smashed the ball into the back of the net.

Bolton continued to dominate despite that set-back, but were left stunned when Blackpool added a second 10 minutes before the break as Neal Eardley clipped the ball into the area for Sylvestre, who hit a first-time shot low into the bottom corner.

Two goals down, and with results elsewhere against them, Bolton fans were already starting to contemplate away days at Bournemouth and Doncaster next season.

However, a crazy couple of minutes just before half-time looked to have changed all that. First, Eagles halved the deficit with a fine strike from the edge of the area after he was picked out by Marcos Alonso, then Davies levelled as his deflected shot flew beyond a wrong-footed Matt Gilks.

Buoyed by that late first-half resurgence, Bolton came out strongly after the break, Eagles launching a free-kick over the bar and Gary MacKenzie scrambling the ball away with Davies and Marvin Sordell lurking.

Lee Chung-yong struck the side-netting late on from a good position before substitute Tom Eaves's effort fizzed just wide of the post as Bolton pressed.

Even without the winner the home side sought, it looked as if they had done enough until Anthony Knockaert's late winner for Leicester consigned Bolton to another season in the Championship.

"Credit to the lads for the performance over a 90-minute period to keep going for the win. It is not to be but we have shown fantastic character over this three-month period and that gives me a lot of optimism going forward.

"The picture is unfolding for me because now I know what we have and where we can go. That game taught me in terms of the players and what action we have to take in the summer to make sure that this time next season we will be in a better place."

"We should have been four or five up to be fair. I thought some of the football we played was fantastic.

"Bolton looked nervous and you would be when you know how important it is to get into the play-offs. They didn't start very well, we sensed they were nervous and we showed that in the first 45 minutes and I think we were nervous in the three minutes of injury time.

"I feel for Dougie Freedman - he has done a fantastic job. He is a fantastic manager and they will bounce back. I am sure Dougie and their players will come back stronger."