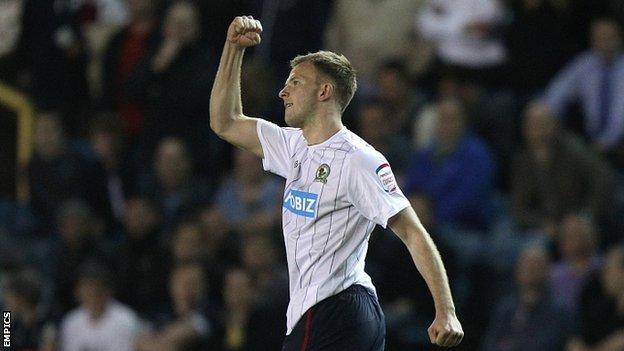 Ravel Morrison's first-half 20-yard left-foot strike looked to have put the Blues on their way to victory.

But Rhodes, so prolific in his days at Huddersfield under Clark, levelled with a close-range header on 66 minutes.

That was his 29th Championship strike of the season - the second best tally in the division.

A point for the Blues was enough to earn them a top-half finish in 12th, seven points shy of the play-offs and five places (but only three points) higher than Rovers, who escaped the drop zone by just four points.

Blues were the dominant side for the opening half hour, although it took a one-hand save by home keeper Jack Butland to deny Rhodes.

That then triggered a succession of long-range attempts from the home side.

Nathan Redmond had a 25-yard shot tipped round the post before Chris Burke fired just wide after being set up by the overlapping Paul Caddis, but the breakthrough finally came just three minutes before the break.

Morrison tried his luck with his left foot and this one fizzed low into the keeper's left corner.

But Rovers were level midway through the second half from David Goodwillie's free-kick, David Jones's header being parried by Butland, only for Rhodes to nod in the rebound.

His 29-goal league tally (including two for Huddersfield in August) leaves him just one shy of Crystal Palace striker Glenn Murray.

"No transfer fees will be paid. The budget will not be anywhere near where it was so players coming in will not be getting the same salaries as they have in the past."

"I thought it was very much an end of season game but in the second half we deserved a goal and we might have nicked the game."