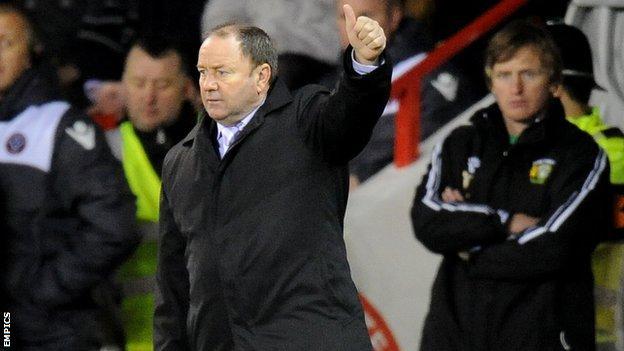 Yeovil Town have a theory behind Gary Johnson's success as manager at Huish Park.

"He's a magician, isn't he?" exclaimed chief executive Martyn Starnes, when talking about his decision to offer Johnson a new contract.

"I don't know where he gets his magic wand from but it's certainly been working this season."

Whether wizard or mortal, there is something special about the Johnson effect.

In 18 months, the 57-year-old has transformed the Glovers from relegation strugglers to League One play-off hopefuls - and not for the first time.

Johnson secured legendary status by leading Yeovil to two promotions during his first spell at the helm between 2001 and 2005.

And, after making a celebrated return in January 2012, he is now three games away from a place in the Championship.

"People trust you because it went very well before," he told BBC West Sport.

"You're in credit. When you say a joke it's funny; When you want to put something on they don't get embarrassed by it.

"All of a sudden the crowd start wearing their colours again, they make a little bit more noise. People are saying the right things and everyone is a little bit happier."

Before his 2001 arrival, Johnson had managed Cambridge, Kettering and the Latvian national team without remarkable success.

But in his first season in charge at Yeovil, they won the FA Trophy and a year later secured promotion to the Football League for the first time - winning the Conference title by a record margin of 17 points, scoring 100 goals in the process.

They breezed through League Two - champions at the second attempt - and soon the time came for Johnson to take his tricks elsewhere, and he accepted the manager's job at Bristol City in 2005.

"I moved on because it was progression for me. It was obviously a bigger club," he said.

"I wasn't sacked [from Yeovil] and I think everyone at the time understood. I'd been here three or four years and I think they thought I deserved it. They were still able to remember the happy times."

Johnson continued his good work at City, winning automatic promotion to the Championship before getting to within one game of the Premier League when they lost the play-off final against Hull in 2008.

But then his so-called magic faded; he sloped out of Ashton Gate in 2010 and joined Peterborough, where he left after nine months after ructions with the chairman, and spent the same amount of time at Northampton before being sacked.

Russell Slade, now Leyton Orient boss, had carried on where Johnson left off and took the Glovers to the League One play-off final in 2006-07, where they lost to Blackpool.

Terry Skiverton, a former Yeovil captain, succeeded Slade in 2009 but the club found themselves bouncing between mid-table mediocrity and relegation danger.

It was time for the little spark to return.

We've been the perennial strugglers at this level and this year we are fighting for a place up there. For a club the size of us it's an unbelievable achievement

"I felt the club only needed to tweak their mentality, and that was instead of trying not to lose, it was time to start thinking about trying to win," said Johnson.

"The club had been in the doldrums for two or three years, probably because everyone had to work so hard to keep them in the division.

"I didn't want to survive in League One. We had to change people's thoughts on and off the field to becoming winners.

"And I didn't feel like I was jumping in on anyone's success. I was the one who got us promotion up the divisions so I felt I came back where I left them."

Yeovil finished last season 17th in the table and Johnson, with Skiverton as his assistant, began to rebuild his empire over the summer - most notably with the cost-effective signings of League One's top scorer Paddy Madden and West Ham goalkeeper Marek Stech.

The Glovers remained under Johnson's spell this term - winning 23 from 46 games to secure their highest ever finish in the Football League.

And now a semi-final play-off against Sheffield United awaits.

"The Championship is like Yeovil's Premier League," said Johnson.

"We started off as a Conference club and now we're at least competing in League One, maybe more.

"We've been the perennial strugglers at this level and this year we are fighting for a place up there. For a club the size of us it's an unbelievable achievement."