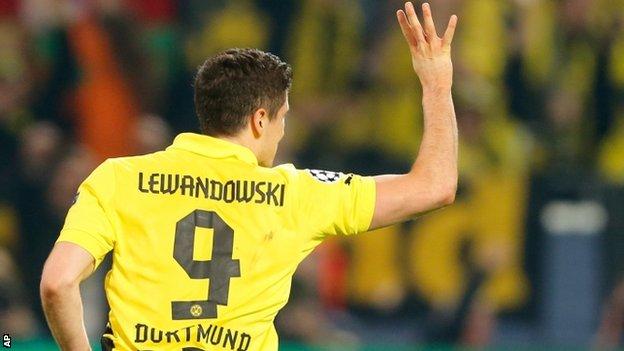 Lewandowski, 24, is out of contract at the end of the 2013-14 season and has been linked with a move this summer.

But, speaking after the Champions League semi-final win, Dortmund manager Jurgen Klopp said: "I do not have the feeling that Robert is on the run and we are not the ones to send him away.

"Let's wait and see what happens next."

Lewandowski became the first player to score a Champions League hat-trick against Real Madrid in a superb individual performance, with his third goal the highlight of a great night for the hosts at the Westfalenstadion.

The striker got hold of Marcel Schmelzer's effort, took a touch to kill the ball, dragged it out of defender Pepe's reach and smashed an unstoppable shot into the top corner.

Klopp said: "This performance will definitely go down in history.

"There are always the same films in the Borusseum [the club's museum]. You will see Lewa's four goals there soon."

One of the clubs linked with a move for Lewandowski are new Bundesliga champions Bayern Munich, who

Lewandowski could have signed for Blackburn in the summer of 2010 for £4.3m from Polish side Lech Poznan. He was due to hold talks with then Rovers boss Sam Allarydce but the Icelandic volcanic ash cloud forced the cancellation of his flight. Two months later, the striker signed for Dortmund. Allardyce instead bought Croatian Nikola Kalinic for around £6m.

But general manager Hans-Joachim Watzke played down the prospect of Dortmund losing two key players to their rivals in one season.

"Robert has a contract until 2014 and there is no exit clause like with Mario Gotze," said Watzke.

"It is our explicit wish to keep him until 2014. That is why we are saying no to a transfer fee."

Lewandowski has scored 33 goals in 42 appearances for Dortmund this season, and has 71 goals in 130 games in total for the club. The striker has 53 caps for Poland, scoring 17 goals.