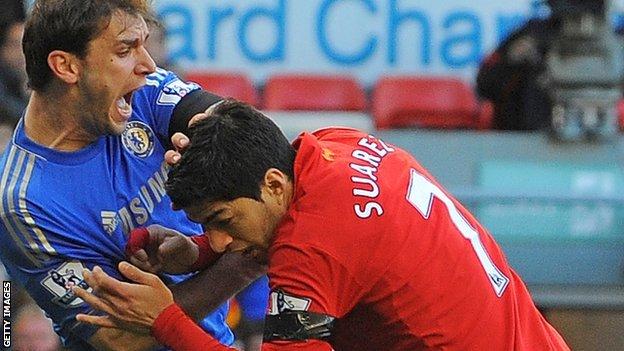 Liverpool striker Luis Suarez has been charged with violent conduct by the Football Association for biting Chelsea's Branislav Ivanovic.

"What Luis Suarez did has absolutely no place in football and he is going to get - and deserves - an extremely lengthy ban. He's a world-class player but he gives you world-class trouble."

The FA said the match officials had not seen it during the game at Anfield and it had been "retrospectively reviewed".

It added that, while the standard punishment for violent conduct was a three-match ban, that was "clearly insufficient in these circumstances".

Suarez has until 18:00 BST on Tuesday to respond to the charge before an independent regulatory commission will be convened on Wednesday, 24 April.

The 26-year-old has apologised for biting the Chelsea defender and spoken to Ivanovic personally to say sorry.

Liverpool have fined the Uruguayan international but insist he still has a future with the Premier League club.

It is not the first time Suarez has been charged for such an offence. He was banned for seven games when he was at Ajax after biting PSV Eindhoven midfielder Otman Bakkal's shoulder during a match in November 2010.

During his time at Liverpool, he was also given an eight-match ban and £40,000 fine by the FA for racially abusing Manchester United left-back Patrice Evra in December 2011.