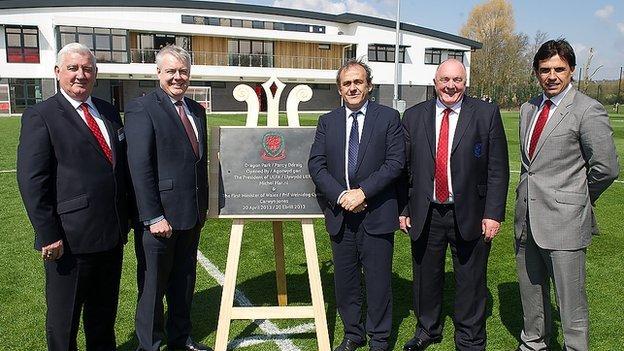 The facility in Newport, called Dragon Park, includes three training pitches, and will be a base for the Welsh Football Trust.

"This is a proud and historic day for Welsh football," said Ford.

"For the first time we have our own centre of excellence, our own national development centre and a facility which will be home to all the best coaches and players."

While impressed with the facility, Platini said it was no guarantee of success for Wales.

"The centre is one thing but you have to have good educators to create good players," said the former France captain,

"You could have a good centre but not good players and never win a game."

The near £5m first phase of Dragon Park, situated at Newport International Sports Village, has been funded with investment from Uefa, the Football Association of Wales, Sport Wales and Fifa programmes.

Newport City Council has provided a 125-year lease for the development of the project on its land.

Ford added:"We hope that with this facility the production of young talent will not only continue but also improve.

"In the future not only will we develop young talented players we will produce teams at all levels who will regularly compete in World Cups and European Championships."

Wales manager Chris Coleman and former players including Ian Rush and Neville Southall were also present at the ceremony.