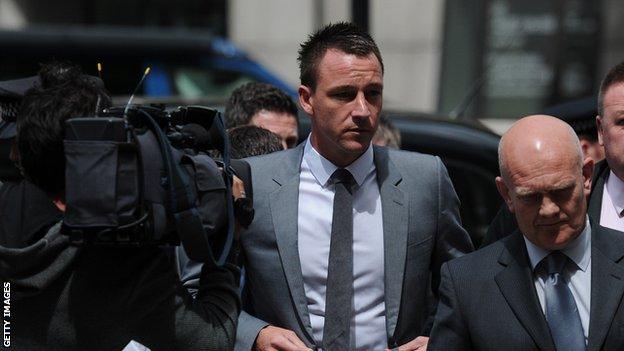 While Terry, 32, was cleared in court last July of any criminal wrongdoing, the FA banned him for four matches.

"It's a difficult one for me. He spoke about me in the court case," he said.

Terry's comments have left the FA confused as Bernstein did not appear in the court case or the disciplinary hearing.

At a ceremony in London to mark the end of Chelsea's year as European champions, Bernstein shook hands with Terry's Chelsea team-mates Branislav Ivanovic, Fernando Torres and Petr Cech.

But, when asked by Sky Sports News whether he had followed suit, Terry replied: "No."

In February 2012, four months after the incident between Terry and Ferdinand in a Premier League game at Loftus Road, Bernstein told Terry in a telephone call that he was stripping him of the England captaincy because he was set to face a criminal trial.

Terry continued to make himself available for England duty, though, and played at the European Championship.

But last September, just before the disciplinary hearing started which would ultimately led to him being handed a four-match ban, Terry quit international football and accused the FA of making his position "untenable".

While admitting his relationship with Terry was "a little distant", Bernstein insisted he was unaware of any handshake snub.

"My relationships with everyone here are really fantastic," said the 69-year-old.

"I didn't notice a thing and I think we should talk about more positive things than that sort of nonsense.

"I'm not really terribly concerned. I have other things to think about. In my last three months I have other priorities."

Bernstein will stand down from his role in July after two-and-a-half years at the helm.