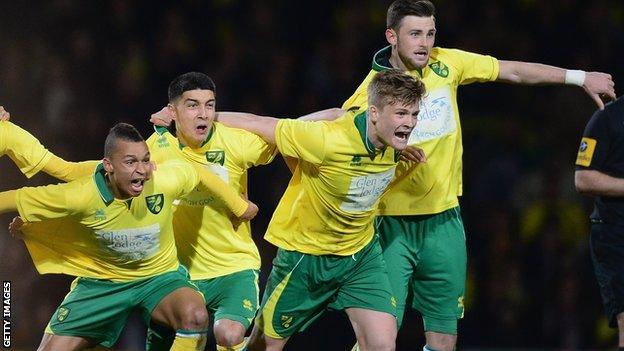 The 10-man Canaries beat Nottingham Forest on penalties after their semi-final ended 1-1 draw on aggregate.

"We get put on the back foot and you have to see how the players deal with that," Adams told BBC Radio Norfolk.

"But I thought they were fantastic. They didn't let it affect them and they saw us through."

But the Canaries clung on through extra-time and won 5-4 on penalties, with Hall-Johnson converting the decisive spot-kick in front of a crowd of 9,690 at Carrow Road.

"We've been through every emotion going. A sending off, extra-time, penalty kicks - it's everything you want in a game of football," said Adams, who played more than 200 games for Norwich between 1994 and 1999.

"It was a fantastic turnout from the fans, I can't thank them enough. It's something the lads will never forget. We're delighted to get through."

Norwich's only ever FA Youth Cup final success came in 1983, when they beat Everton 6-5 on aggregate, with a side that featured Jeremy Goss, who would score one of City's most famous goals against Bayern Munich in the Uefa Cup in 1993, and Louie Donowa in midfield.

The two-legged final will be against either Liverpool or Chelsea, with the Blues 2-0 up ahead of Friday's return match.

"We've got it all to do. We'll be up against it and we'll be underdogs," added Adams. "But we're delighted to be in this position."