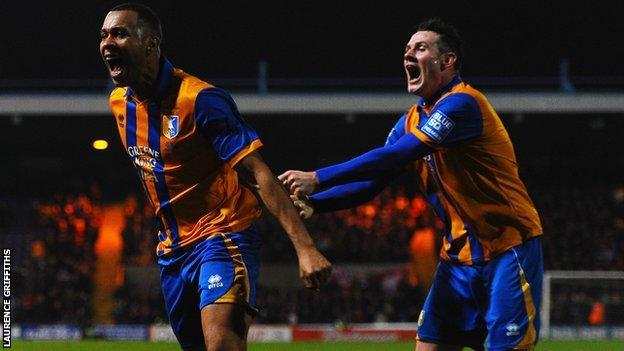 Never mind The Voice, Britain's Got Talent, Dr Who or any other televised teatime treat you care to mention.

This weekend's most exciting viewing could be the climax to the closest Blue Square Bet Premier title race in years.

Mansfield and Kidderminster are separated by just two points and Harriers will be hoping third-placed Wrexham will do them a favour by getting a result at Field Mill.

Having seen the lead change in recent weeks as if it was a giant game of pass the parcel, leaders Mansfield are just one win away from a return to the Football League, five years on from being relegated.

Where's the trophy going on Saturday?

The BSBP trophy will be 45 minutes from Mansfield by road, towards Kidderminster. Call made at half-time. TV cameras will be at Mansfield.

That statement would not have rolled too readily off the tongue back on 6 January, when, the last time they were live on TV, they were knocked out of the FA Cup by Liverpool.

It's not that they did not impress in front of a live terrestrial television audience that wintry Sunday at Field Mill. Far from it. The Stags played very well, gave the Reds a real scare and went home wondering what might have been following a controversial Luis Suarez goal.

But the repercussions of their run to the third round of the FA Cup appeared to affect them and when, six days later, they lost 2-0 at home to Kidderminster, promotion talk would have been considered somewhat fanciful.

Even the victors that day at Field Mill on 12 January were very much title outsiders, hanging onto fifth place in the Blue Square Bet Premier, six points behind leaders Wrexham.

Mansfield were 10th, nine points further back and not even in the frame.

But, when the two sides go into this Saturday's final-day title climax, it is the Stags who look the ones most likely to party.

Both sides have had incredible runs.

In fact, it says everything about Mansfield's magical form, including a Conference record run of 12 straight wins, that Harriers' own winning streak will, in the end, probably prove to be not quite enough to secure automatic promotion.

Since New Year's Day, Steve Burr's men, who were still bottom on 29 September after failing to win any of their first 10 games, have lost just twice - at Macclesfield and Gateshead.

But they were two real slip-ups, given that in this same run Burr's boys have also won at all their fellow promotion contenders - Mansfield, Forest Green, Newport County, Grimsby Town, Luton Town and last Saturday at Wrexham.

That sweet teatime victory came a little over two hours after Mansfield had let slip a 1-0 half-time lead to lose at lowly Braintree. And it appeared that the momentum appeared to be with Harriers again.

"I thought they'd drawn," Harriers boss Steve Burr told BBC Hereford & Worcester. "It was only when my son came downstairs and told me they'd sneaked one at the end that I knew.

"But we can't complain. We've done that to enough sides with late goals this season ourselves.

"And we're just back to where we were last Saturday.

Kidderminster Harriers' five-match losing start to the season ended after they had sold centre-half Exodus Geohaghon to Mansfield Town on August transfer deadline day - and brought in Josh Gowling as his replacement. But who will have the last laugh on Saturday?

"We know Wrexham beat Mansfield at their place the other week and we can only hope. All we can do is concentrate on what we have to do on Saturday, by trying to win the game we're playing in, as we have done all season, against a Stockport side who need to win to have a chance of staying up."

Of the two games, which will be played simultaneously at 17:15 BST, Mansfield's task against an injury-hit Wrexham side that are already guaranteed a play-off place, actually looks easier than Harriers' task - against a relegation-haunted Stockport side and knowing that nothing less than a win will do. And, even then, only if results elsewhere go their way.

Certainly, all the spaces have been filled for Saturday's all-ticket 6,200-capacity crowd at Field Mill.

If Kidderminster Harriers fail to earn automatic promotion on Saturday, it will not be the first time they will have cursed the name Mansfield.

On last season's final day, needing to win to make the Blue Square Bet Premier play-offs, they were trailing 1-0 to the Stags at Aggborough when they had striker Anthony Malbon taken off on a stretcher.

While Malbon left the ground in a helicopter, to be taken to hospital by the Air Ambulance Service, the player he collided with, Stags striker Louis Briscoe scored the clinching second goal in a 3-0 win - and Steve Burr's Harriers ended finishing sixth - for the second year running.

Only 627 away fans made the trip to Edgar Street on Tuesday night. But there will be 10 times that number there expecting to see their team crowned Blue Square Bet Premier champions.

"It might take us a day or two to come down from the high of Hereford," Mansfield boss Paul Cox told BBC Radio Nottingham.

"It was a fabulous sight at the end. We knew a lot was riding on it and it's the first time I've felt quite as elated as I did.

"The adrenalin running through the lads, and the supporters too, was immense. You really can't describe how it feels. You certainly can't buy it.

"But we've still got a big game to come. We've put ourselves in a good position. Saturday is now a massive game for the club.

"And nobody's going to do us any favours. Hereford didn't. And neither will Wrexham. They'll come with their strongest team. You can be sure of that.