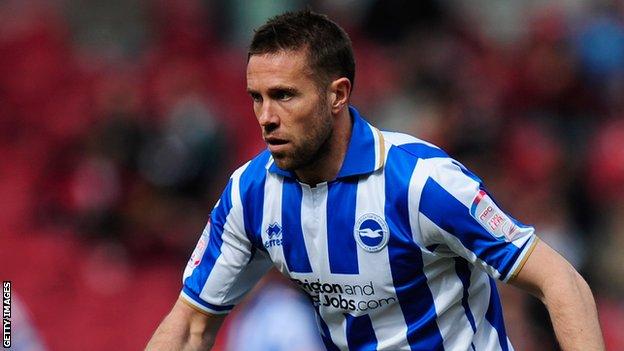 Matthew Upson has called on Brighton & Hove Albion to hold their nerve as the Championship play-off race intensifies.

The Seagulls moved up to fourth after Tuesday's 0-0 draw with Peterborough.

The defender told BBC Sussex: "There are teams which have been in those play-off spots for quite a while and we have just stepped in there.

"It is that time of the year where the results really count and people start to get a bit edgy. We have got a bit of momentum and need to make use of that."

The 33-year-old centre-back, who is on loan from Stoke, added: "Everybody is pushing in that direction.

"It is something we really want to achieve as a group."

The Sussex club are now three points above seventh-placed Bolton Wanderers and eighth-placed Nottingham Forest, with a superior goal difference.

The draw at Posh extended Brighton's unbeaten run to six games and, with their rivals dropping points in midweek, the former England international believes the point will stand them in good stead.

"The conditions played a part in it being a frenetic game," Upson said.

"The pitch was difficult and there was a gusty wind so it was difficult for us to get our game going and get the fluent passing game we like to play.

"Peterborough showed some good intensity in their play and they pressed us. They are in a bit of a dogfight and you could tell that by the way they approached the game.

"We could have stolen it but they had a really good chance so a point is a fair result.

"Hopefully we can freshen up a bit, bring some players in and give a few people a rest.

"Then we can go at the home game [against Blackpool on Saturday] with a fresh intensity."