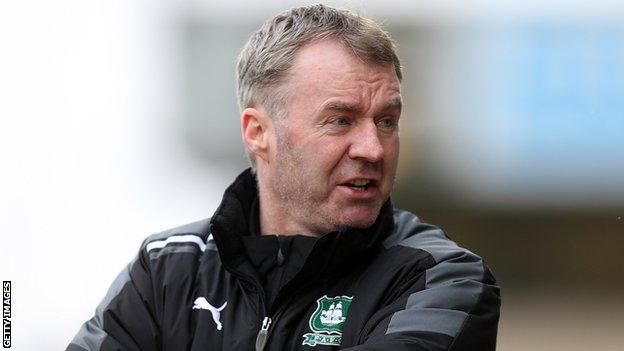 Sheridan with the Pilgrims in the League Two relegation zone.

Argyle have won five of their last seven games to pull away from danger.

"People have asked me about that, I'm not even thinking about it, I've still got a lot of work to do," he said.

"I've told the chairman, we've spoken, and I'm really appreciative of him giving me the job and trying to keep them in the division.

"So if I keep them in the division it'll be a really big thing for me and hopefully everything will take care of itself," Sheridan told BBC Radio Devon.

Tuesday's 2-1 win at the Proact Stadium means Argyle need only one more point to avoid the drop.

Even if Argyle lose both of the final matches they will be safe if Barnet fail to win either of their final two matches.

"The most important thing was the three points and try and keep us in this division," Sheridan said of the win.

"People can still catch us mathematically so we'll concentrate on getting the points we still need.

"We'll focus again on a tough team in Rotherham who are going for automatic promotion," he added.