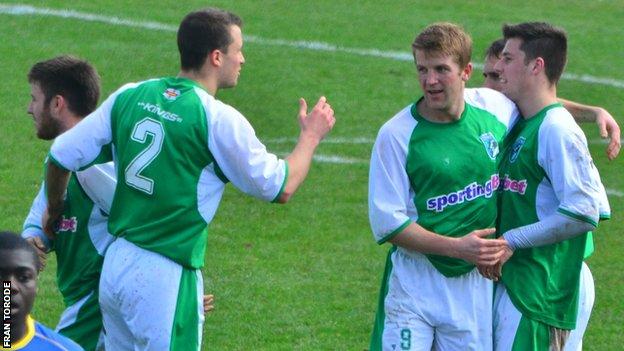 Andrew Juett gave the home side the lead after 71 minutes and Ricky Farnden doubled the advantage with 10 minutes to go.

Matt Loaring scored for Guernsey in stoppage time to set up a tense finish but it was not enough.

"When you're mentally drained to go away and not come back with anything is disappointing," boss Tony Vance said.

"We didn't have much spark which is a shame because we got nothing for our commitment levels.

"But on the pitch itself we didn't deserve to win the game, but but we've got to try and pick ourselves up on Thursday," Vance added to BBC Guernsey.

The game marked the mid-way point of Guernsey's

They travel to Badshot Lea on Thursday before playing consecutive home matches on Saturday and Sunday against Hanworth Villa and Chessington and Hook United.

Guernsey still have six games in hand on league leaders Egham Town and would go top if they were to win all their games in hand.