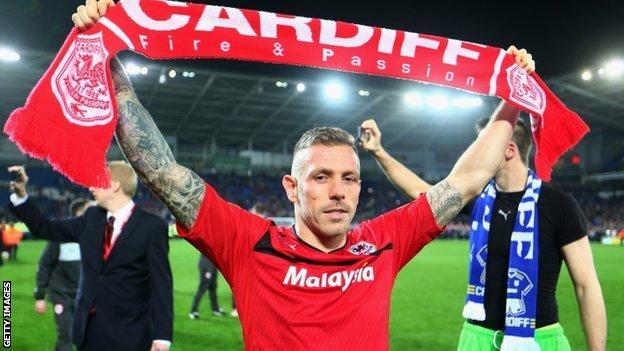 Craig Bellamy has represented nine clubs in more than 16 years as a professional footballer, including giants of the game like Celtic and Liverpool.

Along the way, he has won a League Cup, a Scottish Cup and a Community Shield, collected 74 Wales caps and played for Team GB at the Olympics - but on Tuesday night his name went down in Cardiff City folklore.

When Bellamy finally returned permanently to his hometown club last summer, he made no secret of his ambition to take Cardiff into the Premier League and said it would be his greatest achievement if he managed it.

After Tuesday's goalless draw with Charlton Athletic, he has - and it is.

A point at home to the Addicks means the Bluebirds, having led the Championship for the last 21 weeks, have secured promotion to the promised land with three games of the regular season remaining - and their prodigal son has been at the heart of it.

In a season when City's very identity has been a hot topic - a new red kit and speculation over a name-change to the Cardiff Dragons - the 33-year-old striker has been the figure supporters have rallied around. He may only have scored four goals in the campaign but as the sole Cardiff-born player in the team, his very presence has been totemic.

There was genuine disbelief when Bellamy first arrived on loan from Manchester City in 2010, a signing that gave Cardiff's Premier League ambitions much-needed substance, stardust and steel.

He was not the club's first big-name signing in recent times - Robbie Fowler and Jimmy Floyd Hasselbaink joined in the twilight of their careers - but he has certainly been the most influential.

Cardiff failed to realise Bellamy's dream during that loan spell but the move home had left a mark on him and captured his imagination.

There is little doubt he could have stayed in the Premier League but the dream of taking Cardiff into English football's top flight for the first time since 1962 had become almost a personal crusade.

He left Manchester City to rejoin Liverpool for a second spell, but after a season, and despite new manager Brendan Rodgers's best efforts to keep him at Anfield, Bellamy signed a two-year deal with Cardiff in August 2012.

There was unfinished business at the Cardiff City Stadium.

For the boy from Trowbridge, who left Cardiff as a teenager to learn his trade with first Bristol Rovers and then Norwich City, the homeward journey has not always been a smooth one.

There have been numerous bust-ups and controversies along the way. Among some of the headlines, Bellamy famously confronted Liverpool team-mate John Arne Riise with a golf club and there were also allegations he threw a chair at Newcastle United coach John Carver.

But Bellamy, who has always been a complicated character, has also thrown himself into his charity work with the Craig Bellamy Foundation, which educates disadvantaged youngsters through a football academy in Sierra Leone.

And his sessions with psychiatrist Dr Steve Peters have given Bellamy a new-found calm and maturity, as he has learned to control his "inner chimp".

He may have divided opinion throughout his colourful and controversial career but his commitment to the cause and what he means to the Cardiff faithful - as seen by the number of Bellamy 39 shirts to be seen around the Welsh capital - has never been in doubt.

He has been the driving force for Malky Mackay's side throughout this campaign, transmitting his legendary work ethic and self-belief to a side that had failed in the Championship play-offs for the past three seasons.

He has, quite simply, been a man on a mission and has not allowed those around him to buckle under the pressure.

His own physical powers may be on the wane, but Bellamy has barked orders in his own inimitable style and dragged the likes of goalkeeper David Marshall, midfielders Bo-Kyung Kim, Peter Whittingham, Jordon Mutch and Craig Noone, and striker Joe Mason along with him and into the Premier League.

He has harangued officials and put his injury-ravaged body - he has had seven knee operations during his career - on the line for his hometown club and the Bluebirds faithful have loved him for it.

Bellamy has delivered on his promise but, as a Premier League veteran, he knows better than anybody else that the real work begins now.