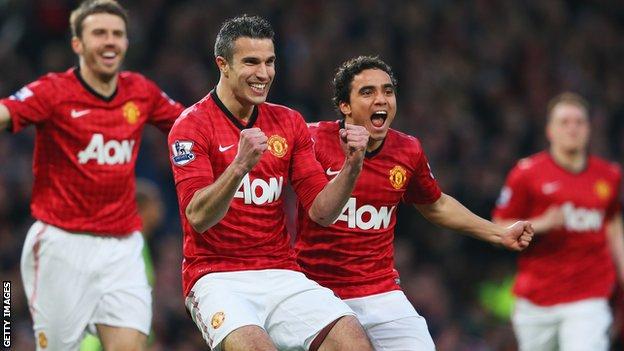 The Dutch striker has been United's stellar striker for much of the season before labouring of late after two goals in his previous seven Premier League appearances.

But the £24m summer signing returned to form in spectacular fashion to secure the silverware with four games to spare.

Defeat for Manchester City at Tottenham on Sunday meant that United knew before kick-off that victory would be enough for them to cross the line.

Despite an improved second-half showing by Villa, now three points above the relegation zone with four games remaining, that outcome never seriously looked in doubt.

United boss Sir Alex Ferguson has now won the Premier League 13 times but the manner and margin of this triumph, a year after seeing the title wrenched from his grasp by City with the last kick of the season, should give him as much satisfaction as his first success.

His side were already 13 points clear before kick-off, and there was an air of expectation bordering on euphoria at Old Trafford.

If there were any nerves too, they went out of the window when Van Persie opened the scoring after 83 seconds.

A move started by Wayne Rooney ended with Ryan Giggs knocking Antonio Valencia's cross into the path of the Dutchman, who converted from two yards out.

It was an ominous start for a defence looking as vulnerable as Villa's, and more chances swiftly followed.

The visitors escaped when Van Persie headed over and Rafael fired against the post but a second goal was not far away.

Villa had just started to gain a foothold in the match, with Christian Benteke firing just over after a quick break, when United struck again in devastating fashion after 13 minutes.

This time it was the home side on the counter-attack, and Rooney's searching ball found Van Persie running to meet it on the edge of the area to smash an unstoppable left-footed volley past Brad Guzan.

It was a world-class strike worthy of putting the seal on a title that has been in United's grasp since early February, when they first moved 12 points clear, but he and United did not stop there.

Giggs ran on to Shinji Kagawa's pass and had a chance to let fly himself, but instead set up Van Persie, who steadied himself before firing high into the roof of the net.

His 31-minute hat-trick not only put the win and the title beyond doubt, it also moved the summer signing to 24 league goals - one above Liverpool's Luis Suarez as the Premier League's leading scorer.

At that stage Villa's prime concern was damage limitation, especially because goal difference could yet play a part in their fight for survival, but to their credit they regrouped for the second half.

It took a goal-line clearance from Van Persie to stop Andreas Weimann from pulling a goal back and David De Gea was called into action to keep out Benteke's low shot.

United's players could be forgiven for having their minds on the parade to come at the final whistle, and even with the encouragement of Ferguson on the touchline, they failed to hit the heights they had managed before half-time.

Villa went close again when Weimann curled an effort wide from the right of the box and, even when United did respond, Kagawa wasted an easy chance to make it 4-0 when he fired over with the goal gaping.

The spirit shown by Paul Lambert's side bodes well for their battle against the drop.

But it only succeeded in taking the edge off the celebrations from the home fans in the stands during the second half.

They made up for it at the final whistle when the ground let out a collective roar of delight.

Ferguson embraced his players as they completed a lap of honour - one they will repeat on 12 May after their game against Swansea when they will be handed the Premier League trophy.