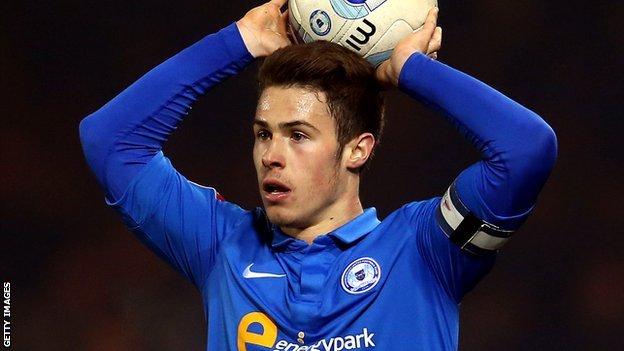 Both sides contributed to an open and entertaining first half, but the game petered out after the interval.

Still, Posh could have taken the spoils had winger Tommy Rowe converted a chance in front of an open goal.

Brighton have gone now six games without defeat and sit fourth, with the hosts 20th and outside the drop zone.

Peterborough enjoyed a bright start and fashioned the first opening as Danny Swanson forced a fine save from Seagulls keeper Tomasz Kuszczak.

Deadlocked at the break, no player proved capable of converting in the second half, none more so than when Rowe failed to finish after a searching ball into the area from Tomlin.

The hosts survived a late scare as Brighton's Andrew Crofts headed against their crossbar, but the points were shared.

"[Talking about a potential red card for Andrew Crofts after he fouled Lee Tomlin when he was through on goal] I have regular communication with the referees' chiefs. All I ask them to do is have a look at any big decisions that I feel have gone against us and let me know if they think the referee has got it wrong.

"Crofts told one of our players that he had no choice other than to take Lee out in that situation.

"It could be a big moment in our season but we will be fine if continue to show the magnificent effort and commitment that we displayed tonight. The lads put in a terrific shift against a very good team, especially as the game came so quickly after a big performance at the weekend."

"People will say that on another night the two efforts which hit the bar could well have gone in, but then again we could also have received a red card as well.

"We put in a serious performance to get what I regard as a good point at this stage of the season.

"Peterborough have beaten top teams in Cardiff and Watford recently so the first job was to be solid and keep them quiet before looking for a chance to score."