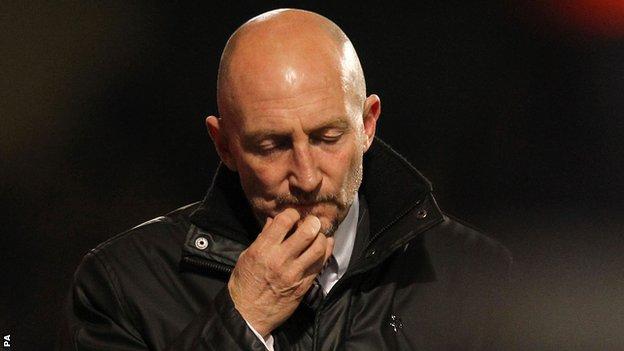 Nouble, 21, struck either side of a stunning Aaron Cresswell effort.

He opened the scoring by shooting into an empty net after Julian Speroni failed to control the ball.

Cresswell fired in from 30 yards before Nouble capitalised on more poor defending to slot past the Argentine.

Ipswich have now conceded just six goals in their last 14 Championship games, having let in 51 in the previous 29

The result means fifth-placed Palace are without a win in six matches.

This run has seen seventh-placed Bolton close to within three points, albeit having played a game more.

For Ipswich, Mick McCarthy can now feel confident that his side are close to securing their Championship status as the victory moved them up to 13th-place with three fixtures to play.

The game at Portman Road burst into life in first-half added time.

Already 1-0 up after Nouble had punished Speroni's error, Cresswell hammered in a left-footed drive from distance before Nouble picked up on a defensive mistake soon after to race through and score only his third goal of the season.

Palace improved after the break, but only seriously threatened to find the back of the net when Kevin Phillips hit the post in added time.

"We're in a far better position than a lot of clubs, but we're not mathematically safe yet.

"We've got three to play, so we've got to keep our focus and make sure we do our job properly."

"In a couple of minutes everything changed. It knocked the stuffing out of us and after that it was difficult to say the least.

"But you've got to believe in yourselves when others don't. It's going away from us and we've got to get it back.

"Life's like that. You have to be brave enough to pull things out of the fire.

"It's going to be a huge test for us, so let's see if we can bounce back. Now's the time to stick together and work our socks off, because the harder you work the luckier you get.

"It's not good enough at this moment in time but I saw all sorts of effort and willingness."