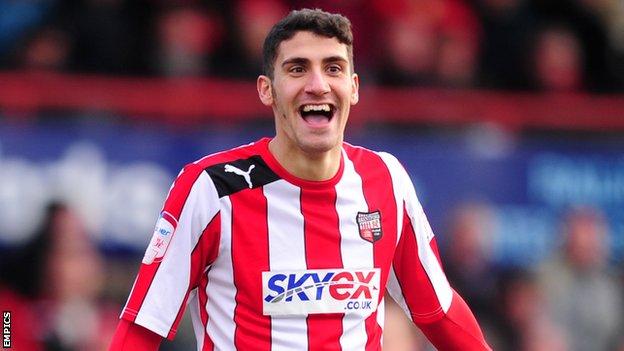 Sheffield United and nine-man Brentford played out a thrilling draw.

Marcello Trotta's penalty put the Bees ahead before Tony Craig was sent off for violent conduct in the area.

Tony McMahon hit the bar from the resulting spot-kick but the Blades went in front through Barry Robson's penalty and Dave Kitson's header.

Sam Saunders then had a penalty saved and home defender Harry Maguire and Clayton Donaldson were shown red before Bradley Wright-Phillips equalised.

The two teams, sitting fifth and third before kick-off, entered the game knowing that a win would be key to their chances of gaining automatic promotion from League One.

In a scrappy opening it was the hosts who had the better of the chances with Brentford keeper Simon Moore saving well from Kevin McDonald and Michael Doyle in quick succession.

Uwe Rosler's side went ahead when Donaldson raced away from the Blades defence and poked beyond George Long before being taken out by the teenager and Fulham loanee Trotta confidently hammered the resultant penalty down the middle.

The hosts pressed for an equaliser before the interval but McDonald volleyed over and a contentious first half, eight bookings giving an indication of what was to follow, ended with the Bees in front.

Visiting skipper Craig saw red early in the second half for an off-the-ball altercation with Kitson in the area but the Blades were unable to make the most of the situation, with McMahon hitting the bar with his spot-kick.

They did not have to wait long for another opportunity to level the scores however, Lee Hodson penalised for handball and this time Robson stepped up to smash his penalty in off the woodwork.

Kitson headed the hosts ahead from Jamie Murphy's centre before Maguire saw red for the Blades for fouling Donaldson in the area.

Long got down brilliantly to keep out Saunders' spot-kick and minutes later Donaldson, booked in the first half for diving, was following Craig and Maguire down the tunnel for a second yellow.

Just when it looked like the Blades would hold out to secure successive wins under caretaker boss Chris Morgan, Brentford sub Wright-Phillips sprinted beyond the tired home defence to coolly slot home.

The draw leaves Brentford one point behind second-placed Bournemouth while Sheffield United, who have a game in hand on the rest of the top six, are four points further back.

"It was just a crazy game of football.

"A lot of bookings, three sending offs, four penalties and I don't even think it was a dirty game.

"It's hard to take, because we get our noses in front after being 1-0 down, were 2-1 up and they're down to nine men. You'd expect us to see it out, but the unity and team spirit to get back in the game is the most pleasing thing."