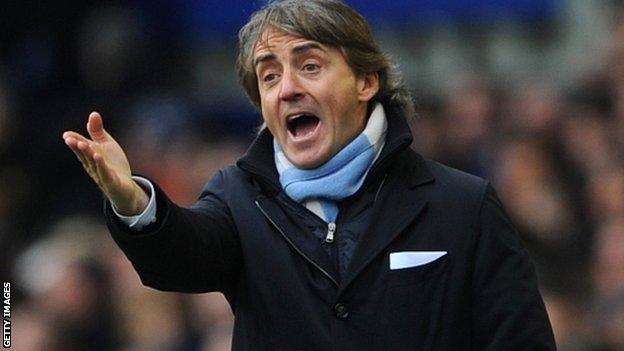 Premier League leaders United are 12 points ahead of City despite losing 2-1 at home to their rivals on Monday.

"If manager Roberto Mancini is the right man, then I can see him adding one or two to the squad," Quinn said.

"And I'd say those one or two could be spectacular."

Republic of Ireland striker Quinn played at Manchester City between 1990 and 1996, making 220 appearances and scoring 78 goals

City's second successive victory at United restored a sense of pride to a team which has struggled to match Sir Alex Ferguson's side this season.

Mancini's outfit pinched the title on goal difference in the last minute of the final game of last season, but this term United have engineered a vast gulf between the two teams and could still break the record for the biggest Premier League points haul - Chelsea's 95 in the 2004/5 season.

Mancini blamed his club's transfer policy as the reason for why City are lagging so far behind United, despite spending more than £50m in the summer.

They signed Jack Rodwell, Javi Garcia, Matija Nastasic, Scott Sinclair and Maicon but City also failed to make an impression in the Champions League again this season casting doubt on the Mancini's future at the club.

Quinn, who made 220 appearances for the club between 1990 and 1996, has doubts about the Italian manager's position because of the perilous nature of the Premier League but thinks sacking him would be "harsh".

And the former Sunderland chairman believes that with former Barcelona directors Txiki Begiristain and Ferran Soriano now in the set-up, City can redress any imbalance in their squad.

Mancini has previously mentioned that he is an admirer of Atletico Madrid striker Radamel Falcao and Napoli forward Edinson Cavani.

"I would imagine Manchester City's scouting network, regardless of who the manager is next season, is eyeing up the best of the best that may become available," Quinn told BBC Sport. "You will also see them trade, and there might be one or two that go that might surprise some people."

On Mancini's future Quinn added: "It's hard to say Mancini is not the right man. He's brought the title there after all these years.

"In any sane, civilised league, you would think he would be given more time but the Premier League is the most high-powered, fascinating, atmospherically-charged league in the world and with that comes the price to be paid for managers looking for time.

"It doesn't happen any more and everything is in a rush so it will be interesting to see what line the Manchester City hierarchy take on this. I think it would be harsh [to sack Mancini]."