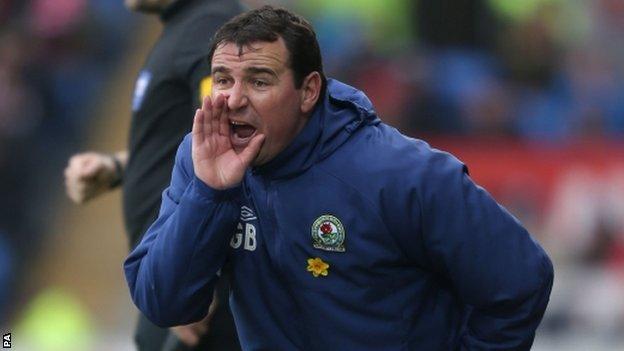 Blackburn caretaker manager Gary Bowyer is likely to miss two days' training this week after being summoned to India for a meeting with owners Venky's.

All four men will meet with Venky's chairwoman Anuradha Desai on Monday.

Bowyer is expected to return late on Tuesday afternoon with Blackburn facing a vital game against Derby on Saturday.

Blackburn slipped in the Championship's relegation zone for the first time this season after Saturday's 3-2 defeat by Sheffield Wednesday. Bowyer has a match since stepping up from his position as reserve-team manager for the second time this season following the sacking of Michael Appleton in March.

The meeting comes at a crucial time, with the club in its lowest league position since 1991 and blighted by divisions at boardroom level.

Singh, who has not spoken to Shaw or Agnew since January, is understood to have met with Venky's managing director Balaji Rao on Saturday to discuss the club's perilous situation but only met with Mrs Desai when his three colleagues arrived in Pune, India on Monday.

The meeting comes after Shaw was told to stay away from Ewood Park by Singh during an investigation into the compensation owed to former boss Henning Berg, who was sacked after 57 days in charge last December. It is understood that Shaw's role in drawing up Berg's contract will be one subject discussed in Pune.

The former Blackburn and Manchester United defender has taken his claim for compensation to the High Court, saying he is owed approximately £2m.

The distractions off the field come in a week when Bowyer is desperate to focus minds on it, with Blackburn having six games left to climb out of the bottom three.

"The next six games are going to decide our fate," he said.

Blackburn's next two fixtures are at home, against Derby on Saturday and fellow strugglers Huddersfield the following Tuesday.

Rovers have the best home record of any team currently in the bottom eight of the Championship, having taken 29 points from their 20 matches at Ewood Park.