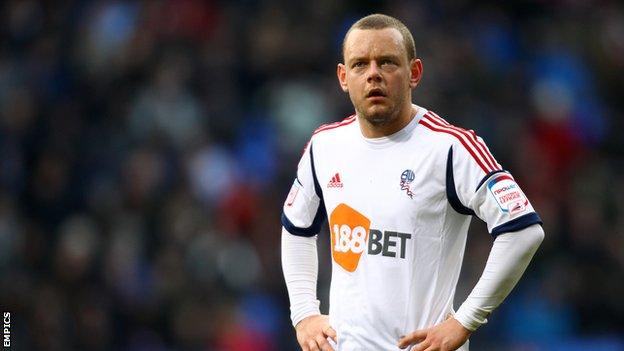 Midfielder Jay Spearing believes Bolton Wanderers can snatch a play-off spot with a late charge in the final weeks of the Championship season.

moved Dougie Freedman's side to within two points of sixth-placed Brighton.

And Wanderers, have five matches remaining to bridge the gap.

"Hopefully we can keep the pressure on the ones above us and sneak up there quietly," said Spearing.

The on-loan Liverpool player, who revealed that there has been little talk of promotion inside the club, told BBC Radio Manchester: "In the first couple of months of the season we didn't perform as we wanted. Now we are and we're picking up results, the lads are all very happy.

"But we're not getting too far ahead of ourselves. We're still in eighth position and we still know we're behind the pack.

Bolton's win against Wolves was their seventh consecutive home victory in the Championship. The last time they achieved that feat was during the 1994-95 season, which ended in Wanderers winning promotion to the Premier League.

"Bristol City [on Saturday] is going to be another big game for us, but we just have to forget about everyone else and concentrate on ourselves."

Saturday's victory was Bolton's seventh consecutive home league win, a feat they have not achieved for 18 years, and saw them keep a fifth clean sheet in a row at the Reebok Stadium.

Freedman, who spent a season with Wolves during his playing career, rotated his starting line-up for the visit of his former club.

He brought Medo Kamara into midfield in place of in-form Darren Pratley, while goalkeeper Adam Bogdan was also recalled, and the 38-year-old boss has promised more changes in the final five matches - a run that starts at Ashton Gate on Saturday.

"I'm a manager who has got to do the best for the team and the club," said Freedman.

"We've got a very good squad and everyone's ticking along nicely now. If you train hard, work hard and listen at my club, you'll get an opportunity to play.

"Don't think for one minute that the team won't be changed next week."