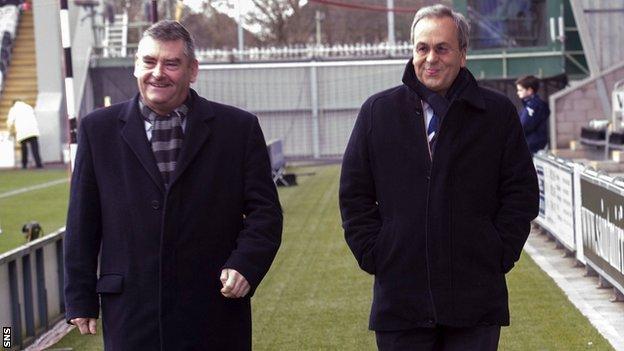 Proposals to change Scotland's league structure in time for next season are unlikely to gain enough support for Scottish Premier League approval.

BBC Scotland has learned Ross County and St Mirren plan to vote against the plans, with an 11-1 majority required at SPL level.

The set-up would involve the top two divisions splitting into three leagues of eight midway through the season.

Other features of the proposals include a revised financial distribution model and the merging of the SPL and SFL, with the Scottish Football Association having also been heavily involved in the protracted discussions.

But, if SPL clubs do not vote it through, it is likely the current make-up of 12-10-10-10 will continue for next season.

Though both County and St Mirren are keen on some features of the package for change, issues such as the use of Under-21 players in matchday squads and keeping the current voting structure are sticking points.

And top-flight clubs other than the Buddies and County also have misgivings about the proposals.

But Dundee United chairman Stephen Thompson believes the 12-12-18 plan is the best way forward for the Scottish game.

"I've put aside a number of my concerns because I think it's the right thing for the greater good of the game so I would urge others to look at that," he told BBC Radio Scotland.

"There's a lot of positive things in there. One league body is important, all-through distribution of funds is important, the pyramid system is very important to the SFA and that's just a few of the big issues that are there.

"We know the gap in wealth is enormous and there [would be] lot of money being given up by the top league to go into the division below and filtered down to other leagues. That won't happen, simple as that.

"We've got an opportunity to improve the game. I think it's got enough of the good things in it to take it forward and vote yes for it."