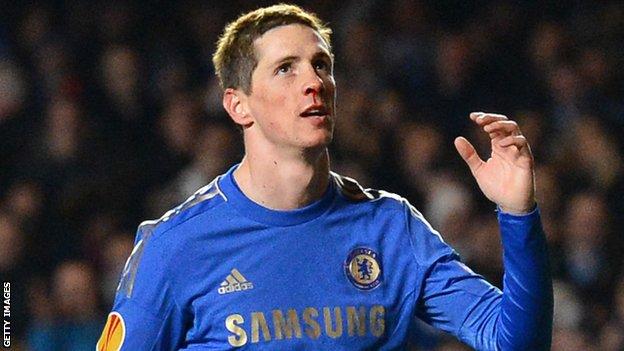 Chelsea striker Fernando Torres says he "will never give up" until he is back to his very best form.

Torres has struggled to justify the £50m price tag Chelsea paid Liverpool for his services in January 2011.

"I want to do the things I used to do all my life," he told the Daily Mail.

"I did them at Atletico, I did them at Liverpool and I am not doing them at Chelsea. I am working on it. If I knew the reason, I would fix it. The only way is to work at it."

The Spain international scored 65 times in 102 Premier League outings for Liverpool, while he netted 84 times in 214 league games for his first club, Atletico Madrid.

Fernando Torres has yet to score a Premier League goal in 2013. He has managed just seven top-flight goals this season, his last coming on 23 December

But the 29-year-old has struggled in London after managing just 14 top-flight goals in 75 league games for the Blues.

But Torres remains without a Premier League goal since scoring in the 8-0 rout of Aston Villa on 23 December.

"I know my statistics have not been the same as in other years but I'm fighting to get back to those statistics," Torres, who has recently been playing in a protective mask after suffering a broken nose, added.

"'I am getting better but I'm still not at the level I want.

"I will try my heart out for this club.

"There are too many things I have to give back to these people and I want to show my thanks to them."

Chelsea have endured a disappointing league season but are still chasing a European and domestic cup double.

They take a 3-1 first lead leg against Rubin to Moscow on Thursday in the Europa League, before returning to face Manchester City in the FA Cup semi-final at Wembley on 14 April.

"Hopefully this season we can give them two more trophies and next season we can fight again for the biggest ones: the Champions League and the Premier League," Torres said.