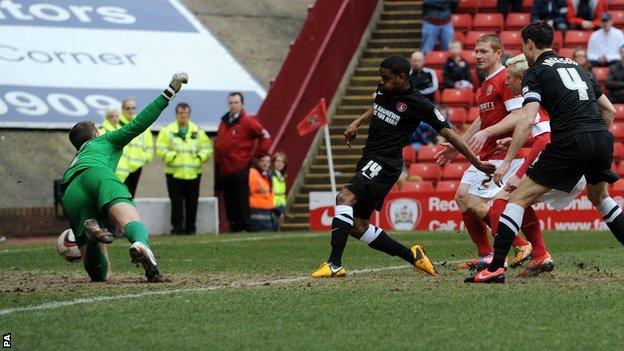 Barnsley had two men sent off as they slipped back into the bottom three after being thrashed by Charlton.

A long-range Callum Harriott shot squirmed under Tykes keeper Luke Steele before the home side had Stephen Dawson red-carded for a tackle on Kermorgant.

Salim Kerkar and Ricardo Fuller's strikes either side of Tom Kennedy being sent off completed the rout.

Charlton's form on the road

The Tykes had won seven of their last eight games going into the game but were beaten in an emphatic manner by Charlton, who moved up to ninth.

Barnsley are one point from safety and manager David Flitcroft will hope it does not have a lasting impact on his side's confidence with four games to go.

It had only taken four minutes for Charlton to take the lead when Pritchard pounced after keeper Steele parried Kermorgant's effort.

Jackson went past two defenders before firing a shot through Steele's legs before the home side threatened when a Jacob Mellis effort was cleared off the line by Rhoys Wiggins.

Kermorgant's header preceded Harriott's goal, which was down to an error by Steele as he let the winger's 20-yarder go under him.

Dawson's dismissal only made Barnsley's predicament worse and substitute Kerkar powered in another Charlton strike to make it 5-0.

Kennedy was also sent off for the home side for a professional foul on Fuller, whose curler in stoppage time rounded off the scoring.

"Today will end and tomorrow will begin - I'm looking forward to tomorrow and galvanising a group of players that are hurting.

"We will have two players missing [through suspension], it's about regrouping a gang of players who do want to play in this league.

"That will have emotionally scarred some players, but it hasn't scarred me. We can move on from this."

"No [we aren't talking about the play-offs], we might take just one more point.

"I just want to savour the moment. It's a great day for us. I'm really proud of them. We go about our business quietly and effectively, but days like this won't come around too often.