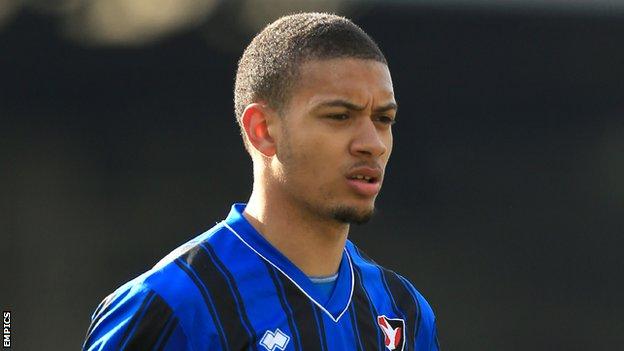 Cheltenham moved up to fourth in League Two with a hard-earned victory over already promoted Gillingham.

After a nervy first half, Gills keeper Stuart Nelson had to be alert to keep out Marlon Pack's fine free-kick.

Chris Whelpdale came closest to levelling, but his shot crept wide for the Gills, who would have been crowned League Two champions with a draw.

Kaid Mohamed had a chance to double the hosts' lead, but fired straight at Nelson when through on goal.

The Robins are two points behind third-placed Burton, who defeated struggling Plymouth, in the race for automatic promotion and are now guaranteed a play-off spot following the win.

Martin Allen's Gillingham, who lost for only the second time away from home in the league this season, now only need one more point from their last two games to be confirmed as champions.

"I think we showed today that we had that aggression and a competitive edge but we passed the ball as well. They were one million per cent better than last week.

"We do things as a collective here; you lose things and win things together. We had a tough week and a bit of soul searching, hopefully they've found it and we can go and do something next week and hopefully take it to the last game of the season.

"We looked a good threat at set pieces again and had decent movement. We worked on set pieces with the players yesterday and thankfully it paid off.

"That is the performance I want next week at Exeter."