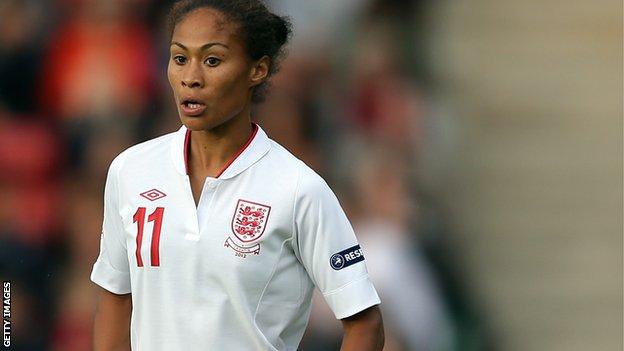 Rachel Yankey will equal Peter Shilton's all-time record of 125 England caps if she plays for the women's team against Canada on Sunday.

A superb strike from Yankey saw England clinch the Cyprus Cup with a 1-0 win when the two sides met in March.

"It's not something I thought I would ever achieve," 33-year-old Yankey says of drawing level with Shilton.

"Peter Shilton is a legend, it will be absolutely amazing to say I've played as many England games as he did."

Many thought that Yankey's England days were numbered when she was left out of the squad for Euro 2009, where Hope Powell's team finished as runners-up.

But she bounced back with style and now looks as certain as anyone of claiming a place in the squad for July's Euro 2013 in Sweden.

"Everyone pretty much told me it was the end of my career when I missed out on selection for Euro 2009," said the Arsenal winger.

"It was obviously a massive disappointment, but I felt that I was playing well and I certainly didn't feel I had anything to prove when I got back into the squad."

Yankey is playing as well as at any stage in her international career, which began with a 1997 debut against Scotland.

Captain Casey Stoney, also a caps centurion, said: "Yanks just seems to get better and better - she was outstanding against Canada in the Cyprus Cup final."

Yankey and Stoney will be out to complete a rapid double over Canada as England's preparations for the Euro finals start building momentum with Sunday's friendly international.

Another victory over the Canadians, who knocked Team GB out in the quarter-finals of last year's Olympic Games, would nudge them closer to the pinnacle.

"We've beaten every team ranked above us apart from Germany, so we're getting closer," said Powell.

"But what the very top teams do is produce consistent performances and results, and that's what we have to start doing.

"In Cyprus we played well against Italy, not so well against Scotland and only in the second half against New Zealand before we did really, really well in the final.

"So for me it's ideal that we're playing Canada again so quickly, to see whether we can produce the same level of performance and hopefully the same result."

But Smith, arguably the best-ever English female player, also missed the Cyprus Cup final and that was won convincingly despite the tight scoreline.

Powell said: "When a player of Kelly's capability gets injured it's not so much a problem as it once was, because we now have much greater strength in depth.

"We showed that in the Cyprus Cup final, hopefully we'll show it again on Sunday and - even more importantly - at Euro 2013 in the summer."