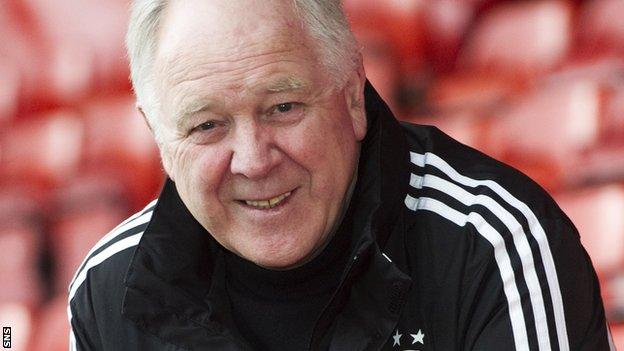 It's the end of an era this weekend, not just for Aberdeen FC but for Scottish football as a whole.

Craig Brown will hang up his gaffer's jacket for the last time, lay his statistics manual to one side and settle down to life as a non-executive director at Pittodrie.

It's a job which will suit him down to the ground.

As anyone who has met Craig will attest, he oozes charm, presses all the right buttons, tells fantastic tales of his life in football and has the ability to make those in his presence feel special and important.

He will be the perfect ambassador for the Dons, a more than effective operator in dealing with fans, corporate guests and, perhaps most importantly of all, potential investors in the club.

I have no doubt he will ease effortlessly into his new role.

I equally have no doubt he will greatly miss the cut and thrust of football management, the tactical battles with opposing bosses, the highs and lows of directly affecting results of football matches.

First and foremost, Craig is a football man: he knows the game inside-out and having enjoyed a run-of-the-mill playing career, he went on to establish a glowing reputation as a coach and manager.

It was that reputation, allied to his re-invention of himself after a spell in the relative wilderness, that prompted Stewart Milne to prise Craig from Motherwell, and it has proved to be one of the Aberdeen chairman's better decisions.

It's true to say his reign has rather petered out, and failure to make the top six - despite Craig's assertion this week that "the league table does lie" - would fall way below expectations.

There are all sorts of reasons why the Dons have struggled in the second half of the season, and the manager has been quick to point them out.

However, that squad should still have been good enough to maintain a higher league placing.

What has to be remembered, however, is where Aberdeen were when Craig took over.

With a club record 9-0 thrashing at the hands of Celtic still fresh in the mind, and six defeats on the bounce, Craig and his assistant Archie Knox sat in the main stand at Tynecastle in December 2010 and watched the Dons lose 5-0 to Hearts, a result which left them rock-bottom of the SPL.

It's too easy to look back and say: "the only way was up".

That club was dying when Craig took over, and using the talents outlined above he gradually brought everyone together, put smiles back on faces, tightened up the team and climbed the table, finishing ninth.

The problem was that Aberdeen never really kicked-on.

Another ninth-place finish last term was less than had been demanded, and despite the early optimism this campaign offered, and a highly creditable 10-match unbeaten run in the SPL, the season quickly ran out of steam.

In the end, Craig's decision to retire probably suited everyone, but his contribution to Aberdeen Football Club over the past few years should not be underestimated.