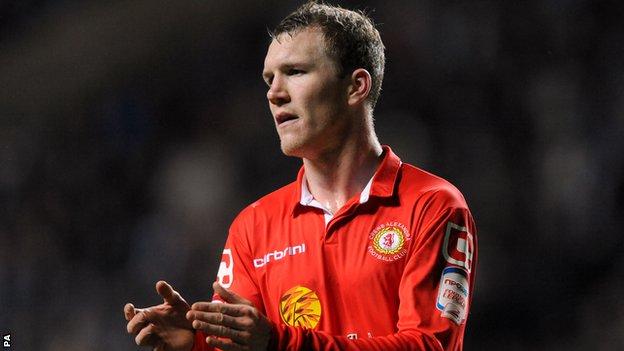 In 2008, the defender's loan deal at Torquay expired 13 days before their FA Trophy final defeat and he was then an unused substitute as the Gulls lost in the 2011 League Two play-offs.

"I really don't want to be sat in the stand again," he told BBC Radio Stoke.

"I'm desperate to play. It's every footballer's dream to play at Wembley and I've already missed out twice."

It's all about winning. We're really looking forward to a final against League Two opposition that we've all faced before.

The 24-year-old joined the Alex from Torquay on a free transfer in the summer.

This season he has been a regular in the side, making 45 starts in all competitions.

"I didn't expect to play as many games as I have to be honest," he continued.

"I've thoroughly enjoyed missing only the odd game, but a part of me is disappointed as I started to think I might play every match and that's something I've never done in previous seasons."

For Crewe, it will be their second visit to Wembley in less than 12 months after winning the League Two play-off final last May.

They are expected to bring as many as 35,000 fans to Sunday's showdown with League Two Southend United.

"It's been a brilliant first season for me and it's unbelievable to think how far the the club has come in a year," he added.

"We're playing in one of the best stadiums in the world, and I'm sure our the fans will make it a really good atmosphere.

"Even though it's a great experience, it's all about winning. We're really looking forward to a final against League Two opposition that we've all faced before so know what to expect."