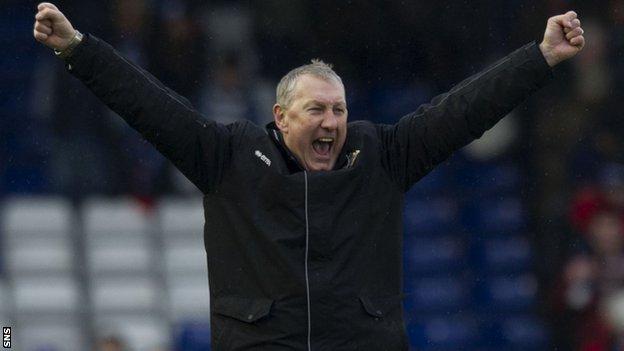 St Johnstone manager Steve Lomas has hailed Terry Butcher as his personal manager of the year for his work at Inverness Caledonian Thistle.

The Highland side are currently third in the Scottish Premier League and are guaranteed a place in the top six after the final pre-split round of matches.

"I think Inverness have been brilliant this year, I really do," said Lomas.

"For me, big Terry is manager of the year. What he has done there is nothing short of miraculous."

St Johnstone face Butcher's side on Friday night in the SPL and Lomas believes it will present another opportunity for his own players to confirm their top-six credentials.

For me, big Terry is manager of the year. What he has done there is nothing short of miraculous

"Inverness is a tough place to go to so we have to re-focus again for this game," said Lomas.

"It's good that they are trying new things. Whether it brings in a bigger crowd or not, I don't know.

"There's a bit of focus, it's live on television, and it's a good platform for some of the lads to go and play and show what they can do."

Lomas now has his sights set on another attempt at European football, after facing Turkish outfit Eskisehirspor at the start of this campaign, but acknowledges the scale of the task his side face if they are to climb higher into the top six and clinch a Europa League slot.

"That's the ambition, but there are a lot of teams there who also want to get it," said Lomas. "You would have to say that Motherwell and Inverness are in the driving seat.

"The European place is there to play for so, to get on a good run at this crucial stage, will be invaluable."

Comparing the achievements of his players this season to last term, Lomas added: "We had a massive turnaround of players in the summer.

"The lads have come in, along with the lads who have already been here for a few years, and bought into what St Johnstone is all about - an honesty, a hard-working ethos, a togetherness and a team ethic.

"We haven't got a goal-scorer on double figures but we have got goals all around the team so it's very much based on a team ethic, rather than one individual."