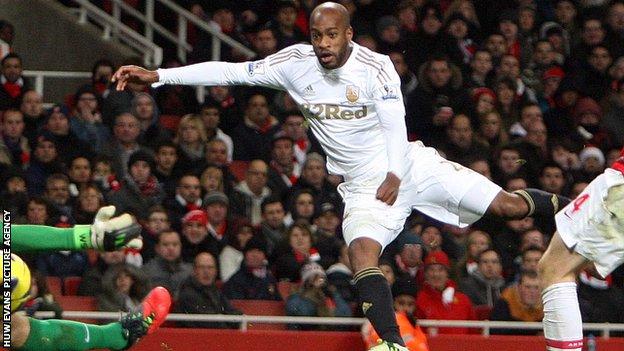 The 27-year-old full back joined the Swans on a short-term contract when left back Neil Taylor broke his leg in September 2012.

"I like to work with Dwight, but there are different things we have to look at within the squad," said Laudrup.

"One of them could be how many British players we have."

Tiendalli's contract ends this summer and he has said he does not expect to stay.

Laudrup added: "Dwight has done well in the games he has played for us - his performance level has satisfied me 100%."

"The most important thing for me is the level of performance, but there are rules and it's something we have to discuss with the club.

"Under Premier League rules, Swansea must have at least eight homegrown players in their squad of 25.

"And there are also separate rules in European competition which must come into consideration."

Swansea will play in the Europa League next season after winning the Capital One Cup.

Tiendalli has made 17 appearances since joining the Swans, his opportunities limited by the emergence of 19-year-old Ben Davies in the absence of Taylor.

Davies, who was on a trainee contract at the time of Taylor's injury, has gone on to make 42 appearances this season - and has broken into the Welsh national team.