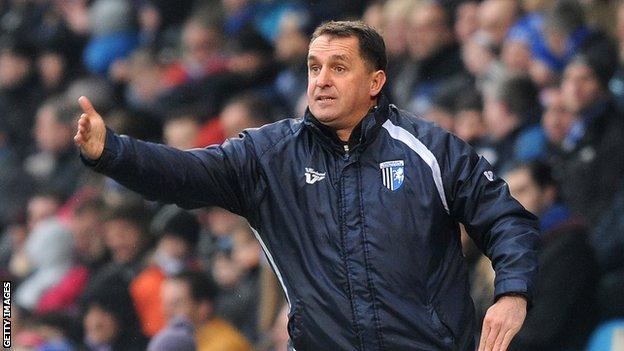 The Gills, who are guaranteed a play-off spot, could confirm their place in the third tier this weekend should other results go their way.

He told BBC Radio Kent: "It is quite surreal for me, being top of the league for all but two weeks of the season.

"It is quite an amazing feat. To do it here in front of our own supporters could be very, very special."

He added: "But we have got to get the job done."

Gills on the brink of League One

Gillingham have been top of League Two for the majority of the season and are already guaranteed a play-off place. They could become the first Football League side to be promoted this Saturday if:

- They beat Torquay and two of Northampton, Burton (who play on Friday) and Rotherham fail to pick up maximum points. (A Gillingham win would automatically put them out of Cheltenham's reach).

- They draw with Torquay and Cheltenham fail to win and Burton and Rotherham both lose.

- If Port Vale and Burton draw on Friday evening, a win will see the Gills promoted (regardless of Rotherham's result). This is because Vale and Northampton still have to play each other, so in that scenario either Vale or Northampton could still catch Gillingham, but not both of them.

Gillingham's goal difference, which currently stands at +28, could leave them virtually up, even if not all the other results go their way.

Allen was appointed as manager of the Priestfield outfit last summer after Andy Hessenthaler became director of football, a move Gills chairman Paul Scally said was down to his failure to deliver promotion.

Allen has previously chased the play-offs and battled relegation during his managerial career and admits he has enjoyed this campaign - one which the Gills have spent in the top two since August.

"I've had promotions as a player but manager-wise, I've taken over clubs near the bottom of the league or turned teams into play-off teams," he said.

"That is a good achievement in itself but I have never known anything like coming here and being top of the table.

"It's tough as a manager but it couldn't be any better, let's be honest.

"I'll be pleased for Mr Scally.

"He picked me, backed me, supported me and lets me manage.

"The staff have all been amazing and the supporters have been different class. I speak to Mr Scally just about every other day on the phone and he never gets on my case."

Four draws in the space of five games last month led to Allen receiving a letter of complaint from one supporter but the 46-year-old is content with performances and has urged his squad to try and finish the job when they host Torquay this weekend.

"People have said we've had bad runs but I haven't seen one," Allen said.

"When we haven't played well we've only lost 1-0. The players keep going.

"They are relentless, fit, thirsty and hungry.

"We will continue to do what we have done throughout the season. We won't be talking about records or what we can do.

"It sounds a bit boring but that is the only process that I know that will work.

"We have got a committed group of players and staff. We have had some tough games and we will have to be right on it."