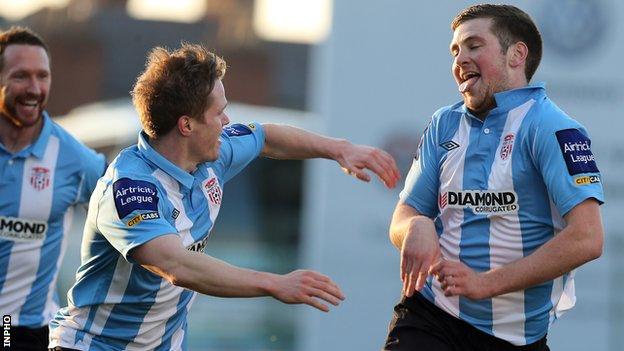 Derry closed the gap on Premier Division leaders Sligo Rovers to two points after this impressive victory over Bohemians at Dalymount Park.

Patrick McEleney scored a superb opener, his 20-yard curler clipping the underside of the bar before going in.

Michael Rafter hit the bottom corner on 26 minutes while Ryan McBride headed in with 15 minutes left.

Champions Sligo can restore a five-point lead if they beat Shelbourne on Saturday.

However, the Candystripes are shaping up to be their main challengers and they were too strong for Bohs in Dublin.

The hosts threatened first with Ciaran Nangle firing across goal and wide, while it was a special goal which broke the deadlock after 14 minutes.

McEleney cut inside and bent the ball past keeper Dean Delaney, who had no chance as the ball hit the net via the woodwork.

Bohemians squandered half-chances while City were clinical and Rafter fired beyond Delaney from Simon Madden's cross to make it 2-0.

McBride and Paddy Kavanagh went close for Derry before the break while Bohemians had a penalty appeal, for a Shane McEleney handball, turned down early in the second half.

McBride was perfectly placed to score City's third, heading home when Derek Pender's clearance off the line, from a McNamee lob, fell straight to the defender.

McNamee completed a comfortable win two minutes later, latching on to Rafter's pass before lifting the ball beyond Delaney and into the corner.