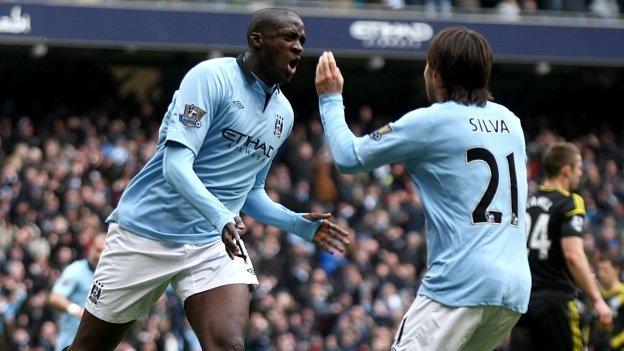 The deal will keep the Ivory Coast international at the Etihad Stadium until 2017.

"This is where I want to be," the 29-year-old told the club website.

"I will never forget how I have been treated here by the fans, the club and the owners and nothing would give me greater pleasure than to finish my career as a Manchester City player."

Toure joined City from Barcelona for a reported £24m in 2010, having helped the Spanish giants win the Champions League title a year earlier.

The box-to-box midfielder has since been an integral member of Roberto Mancini's side, scoring the winning goal in the 2011 FA Cup final and a crucial double against Newcastle United last May to keep the eventual Premier League champions in the title hunt.

Toure has scored eight goals this season as City have progressed to a Wembley FA Cup semi-final against Chelsea on Sunday 14 April, but his side made an early Champions League exit and are 15 points behind Manchester United in the league with only seven games remaining.

"Of course now it looks likely that we will not successfully defend the Premier League title and that is sad for all of us," Toure added. "But we can still finish second and win the FA Cup for a second time in three years and that is still an achievement for a club that won nothing for a long time.

"We must try to finish on a high note and then start preparing to win more next season. Football is always a challenge and always a puzzle to solve and that is why we all love the game.

"You have to use your skill, intelligence and strength to constantly improve and that is what we at City intend to do."