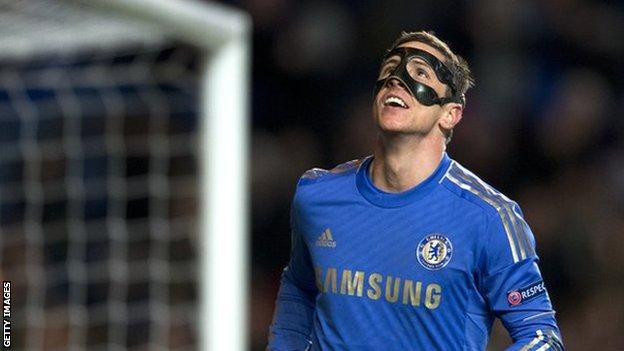 The Spanish striker netted twice to help the Blues establish a 3-1 first-leg lead over Rubin Kazan in the Europa League quarter-final on Thursday.

And interim boss Benitez believes Torres is returning to form at a crucial time.

"He's been working hard and we could see he was improving," he said.

Torres, 29, is without a Premier League goal since 23 December and has been criticised for some of his performances this season.

But the former Liverpool forward has now scored three times in his last two Europa League outings to increase Chelsea's hopes of reaching their second European final in 12 months.

Torres had already opened the scoring against Russian side Rubin before he struck with a classy second-half header to give Chelsea a healthy lead going into next Thursday's return leg in Moscow.

"Fernando had a good game. He scored two goals, was confident and worked hard," added Benitez.

"There were a lot of positive things and if we can carry on in this way it will be good because we had Demba [Ba] scoring the other day and now Fernando scoring twice.

Benitez insists his side still have work to do in Russia if they are to reach the semi-finals.

"To go to Moscow won't be easy because they have some good players, but we have confidence we can do well," he said.

Chelsea, who are fourth in the Premier League table with eight games remaining, face Manchester City in an FA Cup semi-final at Wembley on 14 April.