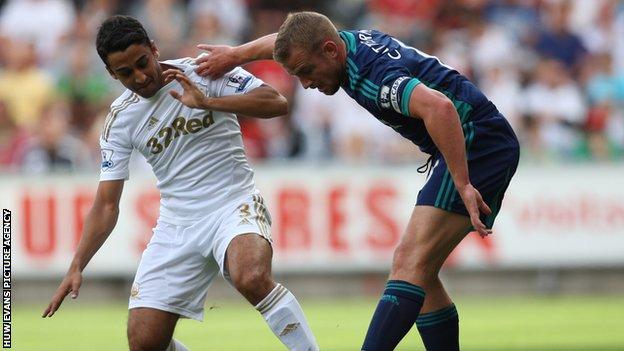 Taylor has been out since September after breaking and dislocating his ankle in a challenge with Sunderland's Craig Gardner.

The 24-year-old's rehabilitation has progressed quicker than expected and he played 80 minutes for Swansea's Under-21 side on Tuesday night.

"Physically he is quite close to being back," Laudrup said.

"He has trained with us for some weeks, but we all know match fitness is a different level and only by coming back will he get that.

"The physical part is one thing, the mental part is another after a triple fracture, which is quite an injury.

"I am happy he's back and let's see when he can come in and make his comeback."

Laudrup is hopeful Taylor will feature during the closing weeks of the Premier League season, although Saturday's trip to Norwich will come too soon for the Welshman.

Norwich are a very strong team struggling with a very bad run, they are at home, and they will want to beat us

But the Swansea boss will have defenders Chico Flores and Angel Rangel available for game at Carrow Road.

Flores aggravated an ankle injury during the 2-1 defeat to Tottenham having returned to the side following a seven-week absence, while Rangel was out with a calf problem.

"They've been training this week so they should be back in our squad," Laudrup said.

Swansea have lost their last three Premier League games and Laudrup wants to see his side get back on track and close in on his target of 50 points for the season.

On Saturday, they face a Norwich side who are still in the midst of a battle against relegation and who have won just one of their last 14 league games.

"Norwich are a very strong team struggling with a very bad run, they are at home, and they will want to beat us," Laudrup added.

"We can win, but the most important thing is to come back and get at least a point. It will be a hard game, a physical game.

"Fifty points is still possible, but if we want them with the games we have to play we need to at least get a draw this weekend."