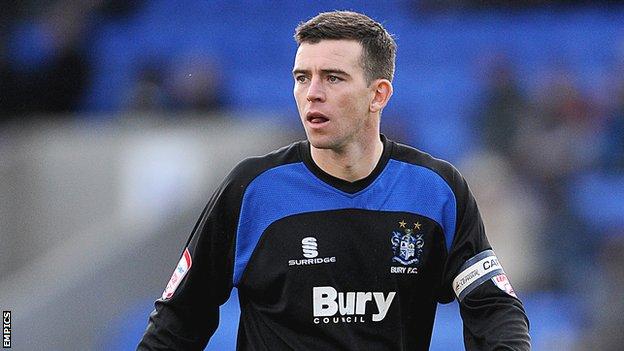 Bury captain Steven Schumacher is to have surgery on a double hernia and will not play again this season.

The 28-year-old midfielder, who is also the club's top scorer with 10 goals in 2012-13, has been carrying the injury for much of the campaign.

"He has soldiered on through for the club. To lose him is a big blow," Shakers manager Kevin Blackwell told the club website.

Bury are seven points from safety with five League One matches to play.

And Blackwell confirmed he will be without his skipper for the rest of the season, which is another blow for the relegation-threatened outfit.

Financial problems and a transfer embargo at Gigg Lane have left the Bury boss unable to fill his bench with the seven permitted substitutes for many recent games.

He added: "We knew 'Schuey' had a hernia shortly after I arrived here [in September]. He's been hanging in there since Christmas and it got to the point that, if he had it done, he would have been out for six weeks.

"The hernia has got to the point of no return and he has felt that lack of sharpness.

"He's had one or two chances that you would put your house on him scoring. He is exemplary on the volley, but he just cannot lift the leg enough to get around the shot. It's affected the ability and the fluidity of him in shooting.

"He has to get it sorted now because we cannot afford for him to miss pre-season."