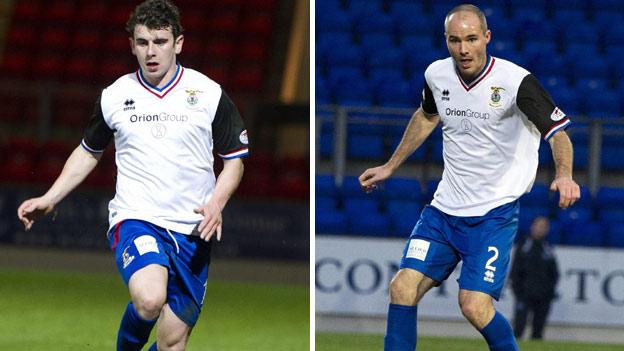 Doran has impressed in the Highland outfit's frontline while Raven has been a first-team regular since joining from Tranmere last summer.

"We're speaking to their agents and getting on very well," said Butcher.

We have got something special here

"I'm optimistic that we can get something done. That might not be until next week possibly."

Butcher is keen for the pair to remain at the club as looks to keep his squad for next season.

"They are good boys and it's nice when players see their colleagues and friends pen two-year deals to stay here," he added.

"If we can get two or three of these boys signed up, it'll mean we've got the nucleus of the squad again for next season.

"If David Raven signs we have got the same back four again, which is a first. It's good because it shows to us they have got a lot of faith in the club and what we're doing."

Irish winger Doran said he would welcome a contract extension.

"I'd be delighted. We spoke last week and I told him to get in contact with my representatives and we can take it from there," he said.

"There have been some discussions this week and hopefully it will be good news.

"We have got something special here. This team spirit is the best I've ever seen and the gaffer has nearly signed everyone up from this team.

"I don't know why anyone would want to leave. We are doing really well and could be playing in Europe next season."