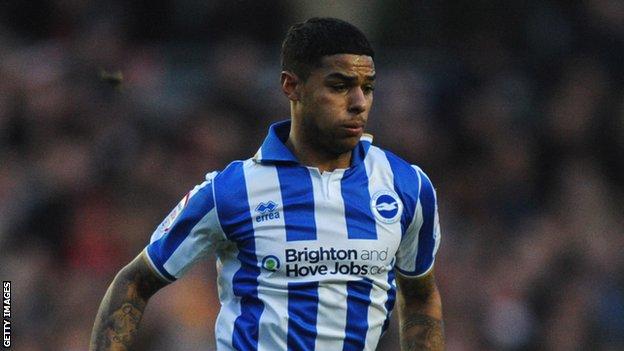 Brighton midfielder Liam Bridcutt says his side have the quality to make the Championship play-offs but admits they must assert their superiority in games.

The Albion currently lie sixth in the table and drew their last two games.

We always knew Leicester was going to be a tough game, even if we had won against Charlton. We have made it a bit harder for ourselves

The 23-year-old told BBC Sussex: "Every draw we have had feels like a loss. We have got to start winning.

"Each team will be fighting for the points to get that play-off position. As long as we keep playing the way we have been, I think we can do it."

The Seagulls followed up Saturday's 2-2 draw at promotion rivals Nottingham Forest with a 0-0 stalemate at home to Charlton Athletic on Tuesday.

"All the boys are disappointed," Bridcutt added. "It feels like we lost.

"We need to start taking our chances a bit more and turning draws into wins.

"As long as we get a result at the weekend we can start to put these draws behind us."

However the former Chelsea youngster, who made his international debut for Scotland in the 2-0 defeat in Serbia last week, says he is relishing the race for the play-offs.

Leicester City, who sit one place and two points behind the Sussex club in the table, are the visitors to the Amex Stadium on Saturday.

"Every game from now until the end of the season is a massive opportunity for us," Bridcutt said.

"We need to win and that is the bottom line.

"It's what you want in your career. This is why you are a footballer.

"You want to be in these situations.

"We always knew Leicester was going to be a tough game, even if we had won against Charlton. We have made it a bit harder for ourselves.

"We have got a great squad and the rotation of the team has been key. It wouldn't surprise me if there are a few more changes.

"If you look through the team there is experience. We know what it takes to be at the top and we have just got to do it now."