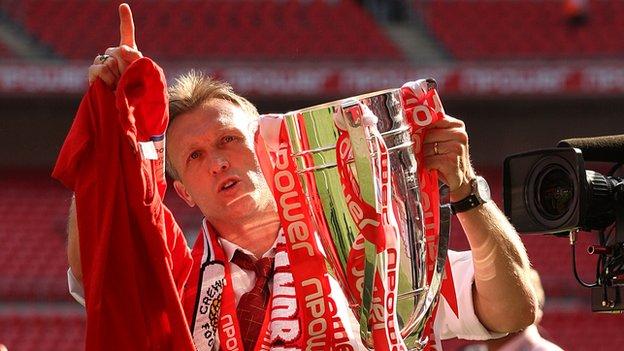 Crewe Alexandra boss Steve Davis has a chance to achieve something few lower-division managers experience when, for the second season running, he leads a team out at Wembley this Sunday.

But, according to the man who gave him his first full-time job in management, this is only the start for Davis.

"Steve will end up coaching at the top level. He still has a lot of success ahead of him," former Nantwich Town chairman Clive Jackson told BBC Radio Stoke.

Davis goes into Sunday's Johnstone's Paint Trophy final against Southend having won his biggest two matches in management so far.

His first silverware came with Nantwich in 2006, when they won the FA Vase at St Andrew's.

He then left Nantwich after five seasons in charge to make the short journey back up the road to Crewe in 2009.

And, since subsequently becoming the third Alex manager to attempt to take over from the long-serving Dario Gradi, he has been a big success at Gresty Road.

After going on a 19-match unbeaten run to win promotion from League Two last May, beating Cheltenham Town 2-0 at Wembley, Davis' side have remained outside play-off contenders all season in League One.

Currently, Davis's Alex stand 12th, 10 points adrift of the League One play-off zone with six matches left, although they have a game in hand.

But their real achievement this season has been to succeed where all other Crewe sides have previously failed in the Football League Trophy by booking another appearance at Wembley - in the JPT.

They have recorded away wins at League One rivals Shrewsbury Town, Doncaster Rovers and Coventry City, not to mention a 4-1 northern semi-final win over League Cup finalists Bradford City, to set up Sunday's meeting with Southend, who they beat in the League Two play-off semi-finals over two legs 11 months ago.

"Not too many teams get to Wembley," added Jackson. "To do it twice in such a short space of time is an outstanding achievement.

"It's the only cup final Crewe can realistically get to.

"I spoke to Dario and he said "I tried for years to get to the final and Steve goes and does it at his first attempt!'

"I've known Steve and his family for the best part of 30 years, since when he first became a player at Crewe.

"He was one of the first ones Dario signed. He's always been very ambitious and we all believe he has the ability to do it.

"It was an obvious move to bring him to Nantwich Town after his short involvement with Northwich.

"He was hurting at the way he was treated at Northwich and it didn't take too much convincing to get him back in the role.

"He might not be on a lot of people's monitors, but I have no doubt that he will take Crewe wherever they want to go."