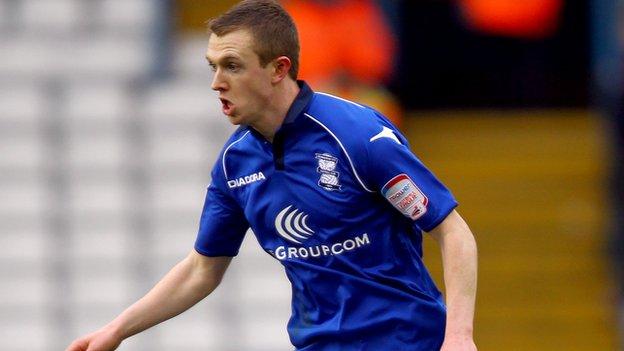 Birmingham City have extended on-loan Newcastle United winger Shane Ferguson's stay at St Andrew's until the end of the season.

The 21-year-old Northern Ireland international was signed initially on an emergency loan to cover Blues' six games up to Easter Monday.

But, after making his debut in the 5-2 loss at Steve Bruce's Hull on 2 March, Birmingham have impressed since.

"The deal has benefited us, Newcastle and Shane," said Blues boss Lee Clark.

He's a terrific little player and a great kid

"You've also got to remember just how young he is as well. He's a terrific little player and a great kid."

Ferguson, who can also play at full-back, had made 14 appearances in all competitions for Newcastle this season.

Prior to coming to St Andrew's, he had not figured since coming on as a late substitute in the 7-3 defeat at Arsenal in December.

But his first return to London since then, on Good Friday, was a happy one, Ferguson curling in a stunning free-kick - his first senior goal - in Friday's 4-0 win against Crystal Palace at Selhurst Park, to seal Blues' biggest away win in 14 months.