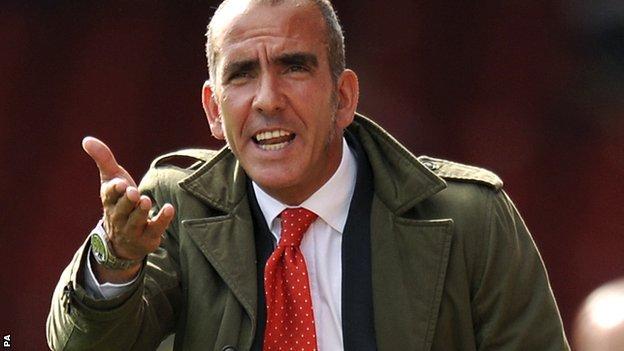 Paolo Di Canio's appointment as Sunderland manager has filled the back - and some front pages - of the nation's newspapers all week. The mercurial Italian's introduction to football management was at Swindon Town, the League One club he left in February.

Here, BBC Sport's Gary Rose, who was the Swindon Advertiser's chief sports writer from March 2011 until April 2012, offers his view on the man he reported on during Di Canio's reign at the County Ground.

It was a rollercoaster ride that had as many highs as lows and finished with a bump, but ask any Swindon fan if Paolo Di Canio's 20 months in charge of their club was a ride worth getting on and the answer would be an overwhelming yes.

Eccentric, arrogant, charismatic and entertaining, Di Canio is a mishmash of contrasting characteristics that all come together to make one of the most unique personalities in football.

His surprise appointment as Sunderland manager on Sunday evening shocked football. It was a similar, but far larger, reaction to when he took his first steps in management with Swindon back in May 2011.

The biggest talking point, as it was when the Italian took over in Wiltshire, has concerned his political beliefs.

In the past the former Sheffield Wednesday and West Ham striker reportedly said he held "fascist" beliefs, leading to a storm of controversy surrounding his appointment to the Sunderland job and the subsequent resignation of ex-foreign secretary David Miliband from the board due to Di Canio's "past political statements".

After taking over at Sunderland Di Canio initially refused to answer questions about his political views but on Wednesday he sought to lay the matter to rest, insisting "I do not support the ideology of fascism".

There had been similar controversy when he joined Swindon. Many supporters felt his views, as then understood, had no place in football and his appointment also did not sit well with the GMB union, which immediately withdrew its sponsorship of the club.

At the time the GMB felt others would soon follow suit. But they did not and from the outset Di Canio insisted he was not at Swindon to talk politics, only football.

So it proved and not once during the countless hours of news conferences and angry post-match tirades that I covered did he blur the line between the two.

Consequently, Swindon fans quickly came to appreciate a person who wore his heart on his sleeve and who felt as strongly connected to a club he had known for only a matter of months as someone who had followed their many ups and downs over decades.

At an open day a week before the start of the 2011-12 season, Di Canio was introduced to the crowd on a stage. He grabbed the microphone and uttered five words that immediately endeared him to the gathered Swindon fans: "We will beat Oxford United". He then followed that up by singing "Dancing in the Moonlight" on stage with the band Toploader.

Passion and dedication are arguably Di Canio's strongest characteristics, perhaps born courtesy of a harsh lesson from his father, who once woke a teenage Di Canio at 05:00 in the morning to take him to work at his father's brickyard.

Di Canio has previously cited that moment as a turning point in his fledgling career, one which made him appreciate the talent he had for football and the benefit that being successful at it would have for himself and his family. He was fiercely dedicated to being the best he could as a player and that drive has continued into his career in management. The Italian expects the same focus from his players.

During a pre-season training camp in Italy a few months after his arrival at Swindon, Di Canio had his players undergoing double training sessions. He would be out there too, talking through tactics and working on moves he wished for them to employ, before returning to the team hotel in the evening.

There, aside from dinner and a short break to watch Italian-dubbed episodes of Seinfeld, he would study Swindon's opponents for the season ahead into the early hours of the morning.

There is no doubting Di Canio is a hard taskmaster. During his first season at Swindon the players had only a handful of days off - and those only coming as reward for a particularly important win.

Crossing Di Canio also brought with it a heavy price. The spat with Leon Clarke is the most high-profile example, the striker and Di Canio having to be separated in the tunnel following a bust-up in the aftermath of a League Cup defeat by Southampton back in September 2011.

In February, Swindon midfielder Alan McCormack was stripped of the club's captaincy for turning up late for a training session having gone to a medical clinic for flu medicine.

Despite the hard work and harsh punishments, there was never a player revolt at Swindon. Instead, they came to appreciate the benefits Di Canio's regime had on their fitness and ability.

Matt Ritchie, League Two and then League One Player of the Year under Di Canio, said shortly after joining Bournemouth in January: "I leave with a heavy heart. I'll miss everyone there, especially the gaffer. I felt like he helped me a lot and made me the player I am today. I've got a lot to thank him for."

The outcome of all that hard work was a league title, cup final appearance and victories against higher division sides in cup competitions, as well as some truly memorable moments for Swindon fans - how often do we see a manager race the length of a pitch to celebrate a last-minute winner with his players as Di Canio did at Northampton?

Everything Swindon achieved in that first season under Di Canio came against a backdrop of personal tragedy for the Italian.

When he was offered the Swindon job he sought guidance from his father, who was ill at the time. His father urged him not to take his health into consideration and instead pursue his dream.

In October 2011, prior to a game against Plymouth, Ignazio Di Canio passed away. In a tragic coincidence, his mother died the day before the return fixture in April last year.

Di Canio in his own words

On both occasions, Di Canio took no additional time off, flying back to Italy for barely 24 hours to be with family before returning to once again focus on Swindon's next opponents.

When an emphatic 5-0 win against Port Vale at the County Ground on 28 April 2012 secured the League Two title, Di Canio unveiled a tee shirt with pictures of his parents on it, raced on to the pitch and, with tears in his eyes, looked up to the sky with his arms outstretched.

It was that human element that Swindon fans appreciated. That ultimately, despite his eccentricity and outspoken comments, he was just working to make his parents proud.

Di Canio is not without his flaws.

He can air views about players or internal club matters that should perhaps remain behind closed doors - the public berating of goalkeeper Wes Foderingham following a poor performance being an example.

The alienation of out-of-favour players, who are often sent to train with the youth team, can be seen as harsh, while the manner of his departure from Swindon, resigning in protest at the sale of Ritchie, prevented him from leaving an unblemished legacy at the Robins.

But there is no doubt Di Canio brought success to Swindon and now, having clarified his political views, he will hope to do the same at Sunderland.