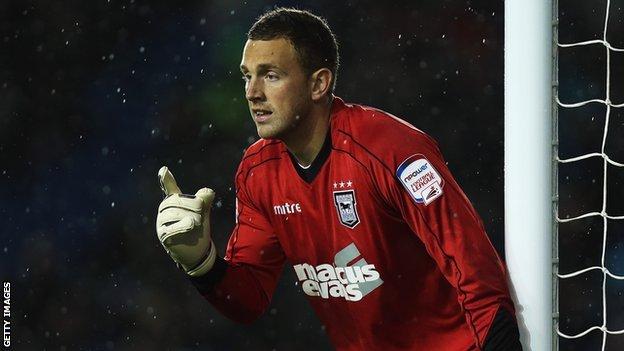 Ipswich Town's Scott Loach has said he will prove he is capable of being the club's first choice keeper following the departure of Stephen Henderson.

Henderson was recalled by West Ham last month, handing 24-year-old Loach an opportunity between the sticks.

"I've got nothing to be scared of," he told BBC Radio Suffolk.

"I've played 190 games in the Championship and why can't I continue that with Ipswich? I've earned my chance and now I've got to take it."

Loach, who was has been in and out of the side since joining his boyhood club from Watford in the summer.

Despite starting the campaign as number one, former boss Paul Jewell turned to Henderson in October and Mick McCarthy stuck with the Hammers keeper when he took over a month later.

But, with Henderson back at Upton Park, Loach has kept clean sheets in his last two games as he looks to keep his place in front of

"Hendo was great to work with but he's gone now. I wear the number one and I want to be number one," said Loach, who has 216 senior appearances.

"I've been through a lot in my career. I'm 24 now, I've played over 200 games, I've been with the England squad, been in a relegation battle, been dropped - I've had the highs and lows.

"It's my boyhood club. That doesn't mean I should be playing but I want to play.

"I have to make that shirt mine and make people proud I'm in goal."