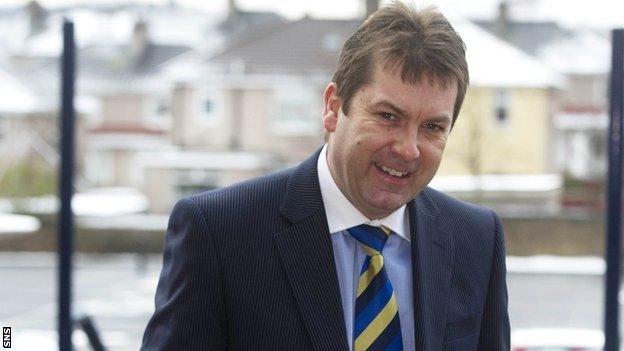 Scottish Football League chief executive David Longmuir is confident there will be change to the country's league structure.

SFL clubs have so far failed to agree on the plans.

"If clubs are exercising caution until they've got sufficient information, that is fine," said Longmuir.

"That is absolutely what they should be doing. It's only appropriate that clubs have the opportunity to scrutinise what's on offer.

"It's not about trying to prevent the process going ahead, it's just a proper diligent process of looking at the books, looking at the numbers, looking at what this means to, in-particular, our organisation, who are a 123-year-old organisation who are about to embrace a package of change that will change the face of league football in Scotland.

"We're going to vote with an SGM on 19 April. By that time hopefully we'll have given every club maximum information to allow them to make an informed decision."

Four days before the SFL gathering, Scottish Premier League clubs will vote on the proposals, which would involve two top divisions of 12 splitting into three leagues of eight midway through the season, a merger of the two league bodies and revised financial distribution model.

"League reconstruction is not an end in itself, it's a means to an end," explained Longmuir. "It's a means to try and take the game forward under one roof and I think it's a positive thing for the game that we're trying to do that.

"Not everyone is happy with every single aspect of this package, including me but I'm a leader of an organisation with no vested interest. I can be objective.

"I was originally a proponent of a bigger [top] league. That's not achievable at the moment. The finances in Scottish football don't allow it. We can't take games out of the fixture card, that reduces income.

"But what we can do is put in place these foundations and start working towards something that brings the finance in and allows us to make changes.

"Change should not be a one-off. It needs to be an ongoing programme."

"I really do understand the fans' feelings on this at the moment but I think we have to turn a corner and re-engage fans once we've turned that corner and bring them on with this," added Longmuir.