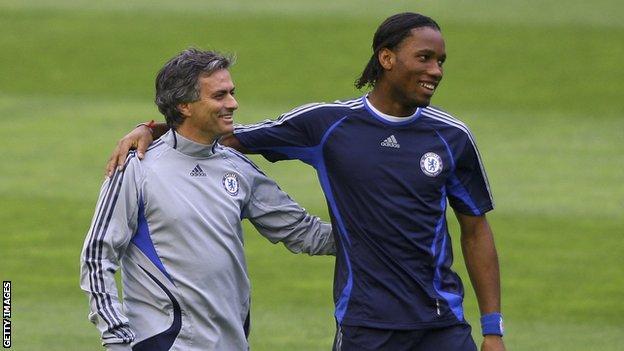 Didier Drogba says Jose Mourinho could return to Chelsea because he has "unfinished business" with the Blues.

The striker was a key member of the Portuguese manager's squad during his three years at Stamford Bridge.

Drogba lines up for Galatasaray against Mourinho's Real Madrid in the Champions League on Wednesday - a trophy the forward won with the Blues last May.

"I don't think he's got over Chelsea," the 35-year-old Drogba said of Mourinho. "They haven't got over him."

Drogba, who left the west London outfit in the summer, feels his former club would benefit from having the 50-year-old manager back in charge for next season.

The Ivory Coast international also feels Mourinho's failure to win the Champions League at Stamford Bridge could tempt him to return.

The Real Madrid coach, who has won the Champions League with Porto and Inter Milan, claimed two Premier League titles, one FA Cup and twice lifted the League Cup during his three years in charge at Chelsea, between 2004 to 2007.

"We won league titles back-to-back with some great football and the only thing he didn't win was the Champions League.

"Maybe that is one of the reasons why he might want to come back. It is unfinished business."

Interim Blues manager Rafael Benitez, who has been an unpopular figure with some of the club's fans, has already stated he expects to leave the club in the summer.

And Drogba added: "I think for the club it is the best solution to bring Jose back. The fans want him back. He loves Chelsea.

"Because you want to rebuild a team and to give them the strength we had a few years ago, he could be the right person.

"He is a winner and is close to the players. He went to Inter and is at Real Madrid, but is still talking about Chelsea, so he loves this club."

Drogba might also be interested in returning to Chelsea in some capacity, should Blues owner Roman Abramovich pursue a deal for Mourinho.

The former Marseille striker, brought to the club by Mourinho in 2004, said: "Let me finish at Galatasaray first and then we will talk about that."

But he added that he still has strong feelings for the Blues.

"For this club I gave everything and, of course, they gave it back to me," he said. "I feel at home when I go to London. When I go to Chelsea's training ground, I can walk around with my eyes closed."

Drogba left Chelsea for Chinese team Shanghai Shenhua at the end of the last season, but he returned to Europe in January, signing an 18-month deal with Turkish giants Galatasaray.