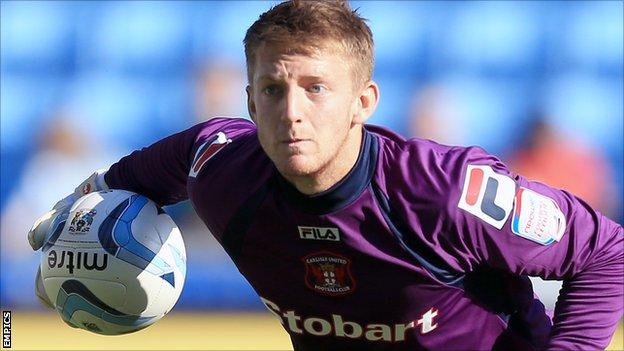 The 21-year-old has established himself as first-choice at Brunton Park after displacing Adam Collin in December, making 19 appearances since then.

"Mark deserves special praise. We think he is going to be a good goalkeeper," Abbott told BBC Radio Cumbria.

"I think today he has shown that when he was needed."

Gillespie joined Carlisle from Newcastle United as an academy player and made his debut against Norwich City in May 2010 before going on loan to Blyth Spartans.

Abbott continued: "It was more dealing with the physicality of the game rather than out and out quality goalkeeping, but he did that manfully and we are delighted with him.

"Maybe I might get a pat on the back for showing we wanted to keep him and keep the confidence in him and keep believing in him."

The Easter Monday draw extended United's unbeaten run to three games, although they are without a win in four matches.

However, the Cumbrians are seven points clear of the relegation zone with five games to play.